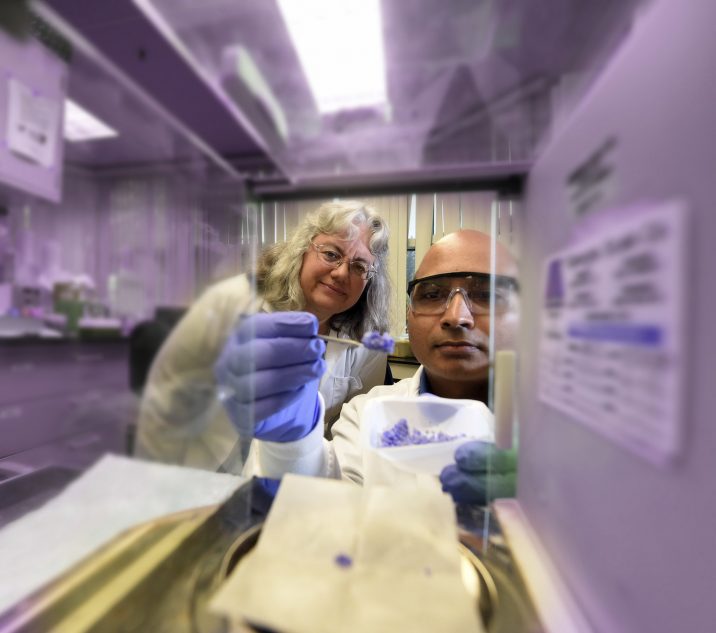 Topical application of the lipid phosphatidylglycerol, or PG, on a mouse model of psoriasis reduced inflammation as well as characteristic, raised skin lesions, they report in the Journal of Investigative Dermatology.

They had already shown that PG has a role in both regulating the function of the major cell type in our skin called keratinocytes and suppressing skin inflammation.

Now they have the first evidence that PG inhibits toll-like receptor activation by the antimicrobial peptides produced by those skin cells, says Dr. Wendy B. Bollag, cell physiologist in the Department of Physiology at the Medical College of Georgia at Augusta University.

Toll-like receptors are a family of receptors that detect external invaders as well as internal damage signals then activate an immune response. Our skin is our largest organ and front line of defense, and a variety of skin cell types make antimicrobial peptides, which function like an endogenous antibiotic to help the skin protect us.

The common skin condition psoriasis upsets the works by increasing both the production of skin cells and production of these antimicrobials by those cells.

Either way, more antimicrobials get produced, which is probably beneficial since psoriasis also impairs the skin’s ability to prevent invaders.

But these high levels of antimicrobials also produce an inflammatory response much like an invader’s might, resulting in the red, flaky patches that typically surface on high-touch areas like the elbows, forearms and knees and also show up on the scalp and elsewhere, says Bollag, the study’s corresponding author.

Because at higher levels, the body sees these protective antimicrobial peptides as danger-associated molecular patterns, or DAMPS, which, as the name indicates, it views as signs of danger. DAMPS then activate toll-like receptors.

It’s the increased and chronic level in psoriasis that heightens the awareness and response, says first author Dr. Vivek Choudhary, molecular biologist and physiologist in the MCG Department of Physiology.

“It’s actually T cells that help maintain the disease,” Bollag says, “But we are thinking that the innate immune system is sort of what initiates it,” she says of that toll-like receptor activation.

In the continuing vicious cycle, all the immune action prompts the skin cells to actually make more antimicrobials in response to the perceived danger. “It’s a natural system that has kind of gone haywire,” she says.

The investigators used S100A9 as their representative antimicrobial. In psoriasis, the levels of S100A9 correlate with the severity of the disease and, when treatment works, blood levels of S100A9 decrease.

They found that both in keratinocytes as well as inflammation-promoting immune cells called macrophages, PG suppressed activation of toll-like receptors by DAMPS, in this case S100A9.

Next steps include finding a version of PG that can more easily permeate the skin since the larger lipid is a bit too big to easily pass through the natural barrier. Interestingly, psoriasis hinders the barrier function so PG can initially get through, but when the condition improves, PG’s access deteriorates, the investigators note.

They suspect PG’s inhibition of toll-like receptors doesn’t just happen in psoriasis, but that constant fine tuning of the immune response is among its usual functions.

“You want to be able to dial it up, but not go overboard,” Bollag says. “We think that may be part of the job of PG, to basically keep the immune system from going from zero to 60 in one second flat.”

This is particularly important in body areas regularly exposed to the elements like the skin, lungs and gastrointestinal tract, she says. Maybe part of the problem with psoriasis is that this fine control no longer works well, she says.

Inflammation in the absence of an infection is a hallmark of psoriasis. The resulting inflammation produces a “feed forward” response: Keratinocytes start to excessively proliferate and abnormally differentiate and the skin thickens.

PG enables the normal differentiation of new skin cells as cells make their way up multiple layers, reach the surface and old cells slough off.

PG is made from glycerin, a natural alcohol, water attractor and key component of many lipids, which helps skin look better and aids this healthy production and maturation of high-turnover skin cells. Glycerin is transported by aquaporin-3, which the MCG investigators believe is decreased in psoriasis versus healthy skin.

Today there are a variety of topical treatments for psoriasis, including vitamin D analogues and glucocorticoids, but nothing that works great for all patients, Bollag says. Part of the problem likely is that psoriasis causes vary and the reality that they are mostly not understood. Systemic drugs also are given that generally suppress the immune response, which have obvious side effects like leaving patients susceptible to infection and cancer.

Bollag doesn’t think PG will be a magic bullet either, but may one day be a good option for patients with mild disease or as an adjunct to other therapies.

PG is also a component of surfactant, which enables the airs sacs in the lungs to properly inflate so we can breathe. It’s been shown to inhibit inflammation in the lungs induced by microorganisms and that it works there as well through toll-like receptors. Bollag notes these new findings about what happens in the skin are likely applicable to similar conditions, where this so-called “sterile inflammation” occurs in response to substances naturally found in the body.

Written by Toni Baker
When you vote for miracles, our patients win
FacebookTwitterPinterestWhatsApp
Bringing awareness to pancreatic cancer during November