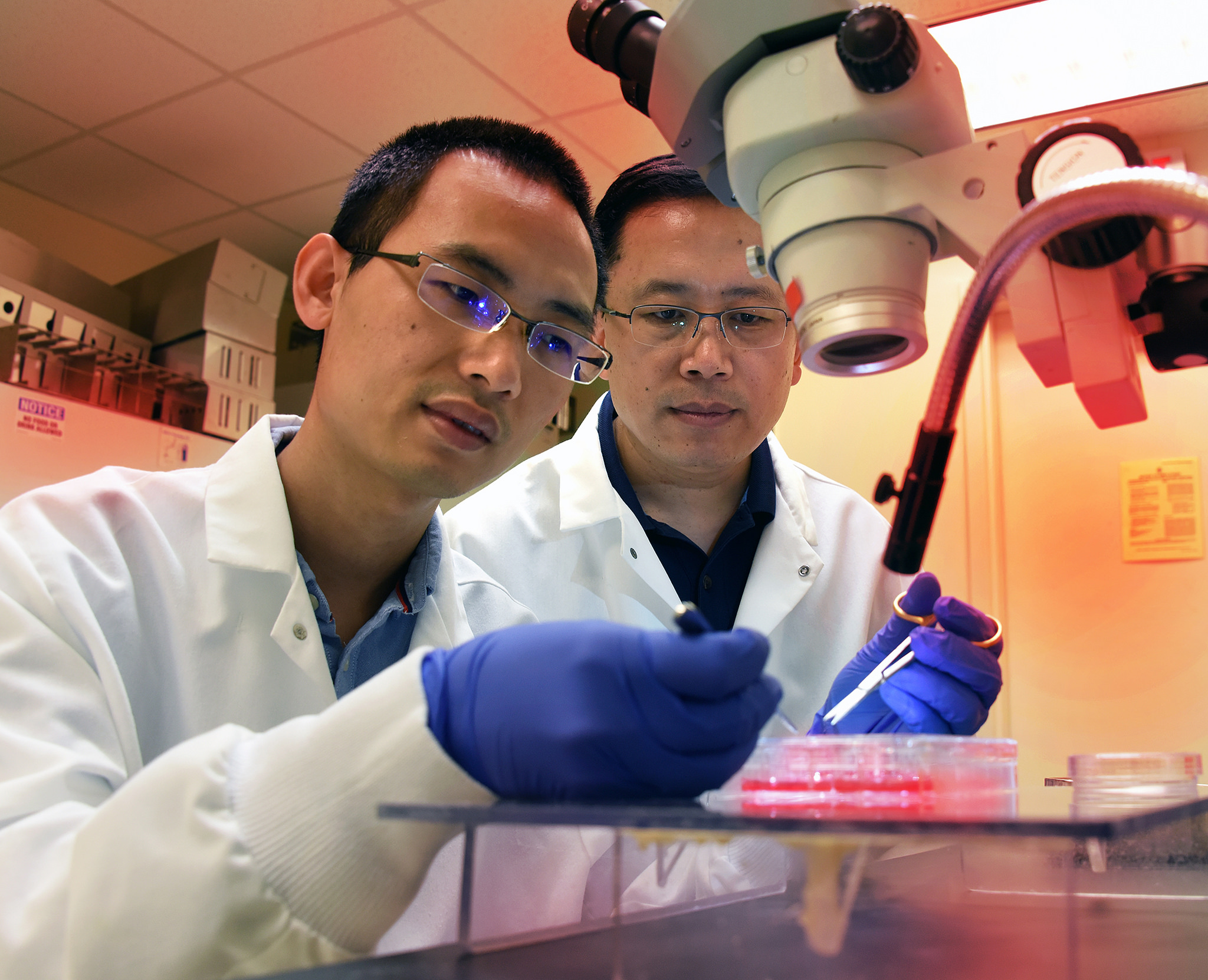 In oxygen-compromising conditions like diabetes, the body grows new blood vessels to help, but the result is often  leaky, dysfunctional vessels that make bad matters worse.

Now scientists have identified a new target for reducing that dysfunctional blood vessel development in the eye in a common condition called diabetic retinopathy, the leading cause of blindness in working-age adults.

An inhibitor of adenosine receptor A2a already is in clinical trials for Parkinson’s disease.

Adenosine is a natural structural component of basic body essentials like DNA and RNA as well as the ubiquitous cell fuel ATP. It can help blood vessels expand, battle bad heart rhythms and even provide pain relief. Its family of receptors includes adenosine receptor A2a, which is important for the retina and found on the endothelial cells that line blood vessels, says Huo, co-corresponding author of the study in the journal Nature Communications.

Endothelial cells that line the blood vessels of the retina begin to shrink, even disappear in diabetes. Expression of adenosine receptor A2a increases, apparently to enable endothelial cells to take up more glucose that can be converted to energy to help restore good oxygen and blood flow. In this case, that means repairing existing blood vessels and growing new ones in a process called angiogenesis. But in a scenario where the cells don’t use energy efficiently or build blood vessels well it’s actually called “pathological angiogenesis.” Old and new blood vessels alike readily bleed or contract, leading to hemorrhage and/or retinal detachment and blindness, the scientists write.

“They grow too much, too fast,” Huo says. It’s not yet clear whether it’s the high glucose levels of diabetes and/or the resulting inflammation or other factors that increase expression of adenosine receptor A2a. Huo notes that adenosine’s many actions include an anti-inflammatory effect.

But the work of Huo and his colleagues indicates that however it happens adenosine receptor A2a’s higher profile role in this scenario makes it a likely treatment target.

A key problem appears to be that the receptor aids the inefficiency of endothelial cells. These cells generate about 85 percent of their fuel through glycolysis, a way to convert glucose to the cell fuel ATP without using oxygen. Even with plenty of oxygen handy, endothelial cells appear to like this method. By comparison, cellular respiration, which requires oxygen, produces nearly 40 molecules of ATP per molecule of glucose versus only about two ATP molecules per glucose molecule with glycolysis.

When the scientists activate the receptor, it promotes the enzymes that promote glycolysis. Increased use of this inefficient energy production process of glycolysis has been shown to occur in endothelial cells in people with proliferative diabetic retinopathy.

Conversely, when the scientists knocked out or deleted adenosine receptor A2a from endothelial cells, it decreased glycolysis. Blocking glycolysis, in turn, dramatically inhibited blood vessel proliferation and sprouting of endothelial cells that overexpress the receptor.

When oxygen levels were more normal, knocking out or deleting adenosine receptor A2a didn’t seem to have that much impact on glycolysis, possibly because the receptor’s expression is not that high when oxygen levels are normal, the scientists suspect.

All the reciprocal cause and effect they found supports the new idea that the receptor promotes glycolysis, which promotes pathological angiogenesis in retinopathies, Huo says.

Much work remains. For example, they have not yet figured out the connection between the adenosine receptor A2a and VEGF receptors, but there has to be some synergy, Huo says, since as its name implies, vascular endothelial growth factor, or VEGF, also is clearly important to endothelial cell repair and new blood vessel formation.

In the right environment, adenosine A2a receptor has a positive role in blood vessel formation as well: activation of the receptor in a mouse model of wound healing shows increased activation of healthy angiogenesis that aids recovery.

Inhibitors under study for that degenerative condition appear to decrease uncontrolled movement and generally slow disease progression without significant side effects, Huo says.

It’s the safety and effectiveness in that condition combined with his findings in the retina, that have Huo planning to use existing inhibitors in his studies. He’s also working with co-corresponding author and chemist, Dr. Mei Hong, of the Drug Discovery Center, Key Laboratory of Chemical Genomics, Peking University Shenzhen Graduate School, to develop another adenosine receptor A2a inhibitor.

Endothelial cells likely opt to use glycolysis because during development, many are formed in a hypoxic, or no oxygen, environment, Huo notes. Many other cell types only turn to glycolysis when they are stressed. He adds that caffeine is a not-very-specific blocker of adenosine receptor A2a.

The retina is inside the back of the eye, a multi-layered and vascular tissue, which receives light and transforms it to a neural impulse that goes to the brain.  The optic nerve that transmits the neural impulses is in the center of the retina, and the retina’s major blood vessels radiate from the optic nerve.

In addition to efforts to better manage blood glucose and blood pressure levels, current therapies for diabetic retinopathy include laser surgery to attempt to seal leaky blood vessels as well as surgery to remove vitreous gel, blood and scar tissue to better enable light to again focus on the retina. Direct injections into the eye of steroids may help with swelling and an anti-VEGF treatment may help reduce growth of the leaky vessels.

Written by Toni Baker
A quick stick or get sick: Employees receive flu shots to protect themselves and patients
FacebookTwitterPinterestWhatsApp
Chest Pain Center recommended for re-accreditation