King named 2015 Resident of the Year 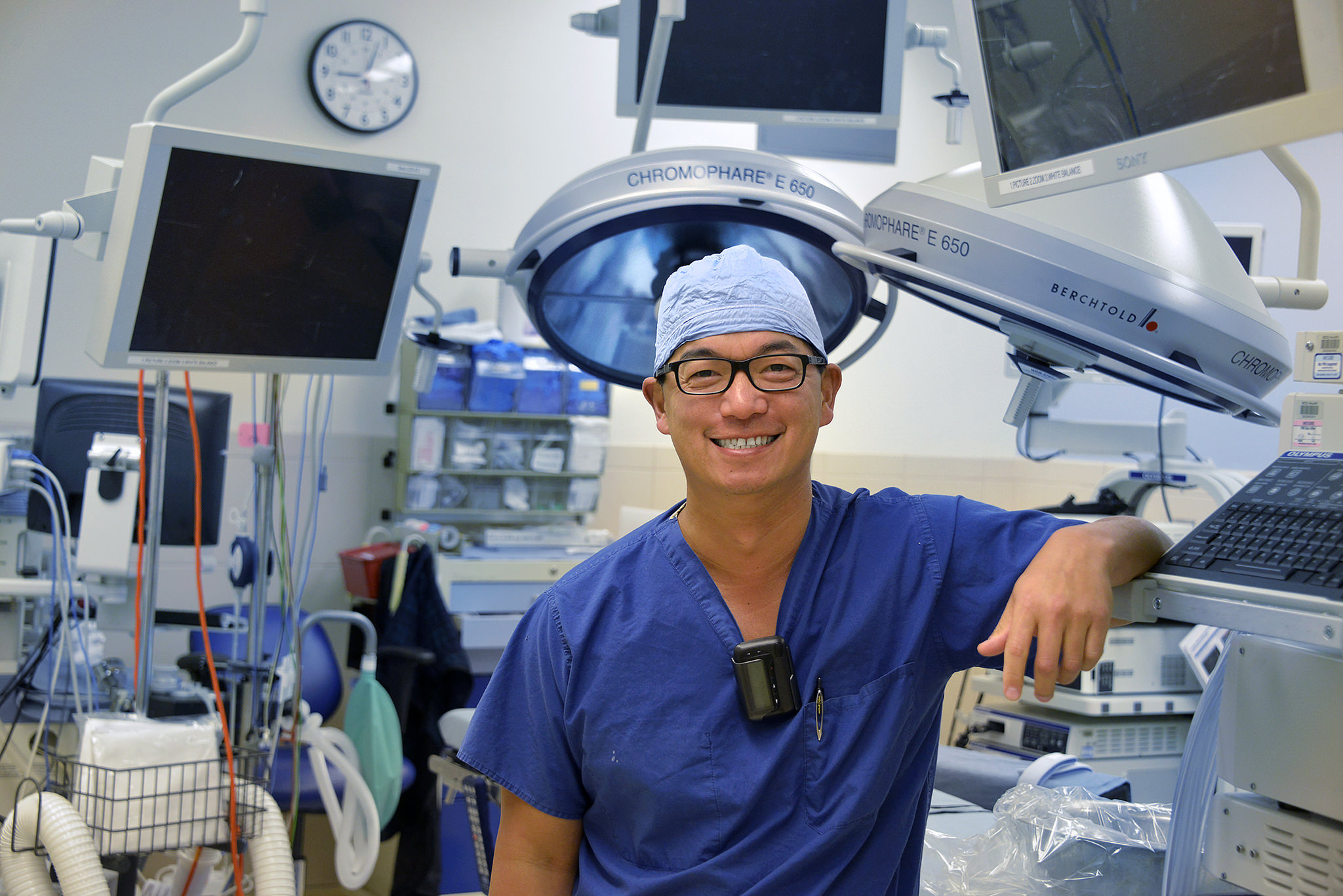 Dr. Ray King often compares his life to the movie “Big Fish,” about a man who’s made amazing accomplishments and had some awesome adventures … that no one ever believes really happened.

For example, he traveled the world during and after high school with a drum and bugle corps – even performing at the closing ceremonies of the 1996 Olympic Games.

He spent four months setting up a medical school in Kathmandu, Nepal.

He moved to Dominica to teach anatomy to medical students at Ross University, lived through Hurricane Ivan, and then became a medical student there himself.

And now he can add one more accomplishment to the list. King, a General Surgery Resident, is the 2015 Resident of the Year at the Medical College of Georgia at Georgia Regents University.

“I feel like life is about opportunities, and if you take a chance, they often beget other opportunities,” he said. “That’s certainly been the story of my life.”

King’s story really began when he was 10-years-old and his mother and father uprooted their lives and moved the family to the United States from Taiwan, he says. “They left successful careers behind. My father was a renowned architect, whose firm actually designed the country’s capital, and my mother was vice president of the national bank. But they wanted my sister and me to have access to a better education, to have choices about what we wanted to do with our lives. They gave up everything and literally had to start over.” In Taiwan, he says, there is only one university, and courses of study are determined by a standardized test, not personal choice.

A confessed “shy kid,” King says he performed well academically at his New Jersey high school, but kept to himself until he had an opportunity to join the Cadets Drum and Bugle Corps as a trumpet player. “It was like joining the circus,” he said. “We toured every summer, and I was performing with 150 musicians who were around my age. That’s when I really began to open up. I auditioned and became the conductor, and we performed at some amazing venues, including the Olympics and World Cup. I think that was a pivotal point for me, because it changed my outlook on what I could do. I stayed with the group for 6-7 years, and that really opened me up to the fact that life is full of opportunities if you just look for them.”

Convinced he wanted a career in professional music, he enrolled at Rutgers University as a double major in music and biology. And then an anatomy class changed everything. “I absolutely fell in love with it and thought to myself ‘I could do this for a living,’” he said.

After graduating, he moved to Boston to pursue his PhD in anatomy and neurobiology at Boston University School of Medicine. While in Boston, he attended a seminar on acupuncture and “really enjoyed it.” He sensed another “opportunity” moment and pursued his master’s degree in the practice – at one point defending his doctoral dissertation and taking his licensing boards to get his graduate degree at the same time.

After receiving his PhD, he began teaching gross anatomy at the University of Massachusetts Medical School while working as a postdoctoral research fellow at Massachusetts General Hospital and Harvard Medical School. And then another “moment” came. “Harvard approached me about an opportunity to travel to Nepal and set up a medical school in Kathmandu, so I went,” King said. “I was actually there during the Nepalese-Maoist uprising.”

Back in Boston four months later, while setting up his acupuncture clinic, he was hired by Cirque Du Soleil to work with their performers. “That’s when my parents got concerned, because I’d literally joined the circus,” he said laughing.

He was also still on faculty, teaching anatomy at UMass, when he was invited to Ross University School of Medicine in Dominica as a guest lecturer. That lecture turned into a job offer – to be the director of Ross’s medical gross anatomy courses. He accepted and started teaching there in 2004, just before Hurricane Ivan – the 10th most intense Atlantic hurricane ever recorded – made landfall.

The wind settled, and it took about two years before he began to feel “stagnant,” in his career, he says. “I wanted something more and was thinking about applying to medical school,” King said. As a young faculty member, I had been able to do a lot of innovative things at Ross, and they were impressed with my work. The Dean came to me and said if you stay on with us and teach, we’ll cover the tuition.”

The offer was one he couldn’t refuse – albeit very confusing for his medical school classmates to be in class with one of their professors, he said. But the university brought him more than the chance to go to medical school. It brought him his wife, Dr. Jessica Van Beek. When they registered for the couples match in 2010 – he in general surgery and her in otolaryngology – people told them there was no way it would happen. “I wasn’t going to let that discourage us,” he said. “Who were they to tell us it couldn’t be done?”

Turns out it could. The couple matched at MCG, and King has even served as a clinical assistant professor of gross anatomy, teaching MCG students while he was a resident. After finishing residencies this month, the couple will travel to Minneapolis and Chicago for one-year fellowships at the University of Minnesota and Lurie Children’s Hospital of Chicago – his in colorectal surgery, hers in pediatric otolaryngology.

“I’m just so profoundly thankful for this opportunity and for the many opportunities the MCG Department of Surgery has provided me over the years,” King said. “Gratitude has always been one of my most important life lessons. In a way, my whole life has been about showing gratitude for what my parents did for me over 30 years ago.”