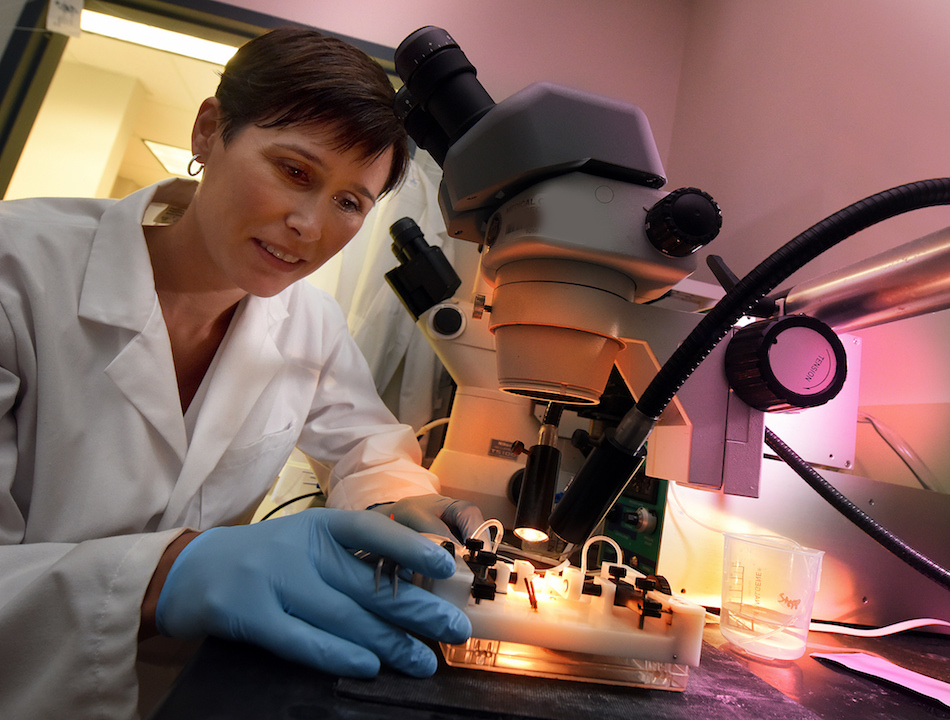 How gestational diabetes puts babies at lifelong risk for cardiovascular disease, under study

Gestational diabetes can put babies at a lifelong risk for cardiovascular disease, and scientists want to better understand how.

Their goals include finding a marker that would give parents and physicians an early heads up of this unhealthy fetal programming and a chance to intervene.

Scientists aren’t talking genetics this time, rather more about environmental exposures during development – like the mother’s poor nutrition or smoking and, in this case, high glucose levels – that may have a lasting impact on baby, said Dr. Jennifer Thompson, postdoctoral fellow in the Vascular Biology Center at the Medical College of Georgia at Augusta University.

“We are seeing more and more children getting type 2 diabetes and hypertension,” said Thompson, a scenario typically attributed to the child’s lifestyle after birth and/or genetics.

“What if it’s actually the intrauterine environment? A lot of that may be preventable by interventions during pregnancy,” said Thompson, who recently received a $1 million Pathway to Independence Award from the National Institute of Child Health and Human Development.

The grant is enabling studies with a mouse model Thompson developed that should better identify the mechanisms through which the mother’s metabolic dysfunction during pregnancy programs similar, and apparently lasting, dysfunction into her baby. A handful of clinical studies have indicated babies born to moms with gestational diabetes are at increased risk for chronic problems such as cardiovascular disease and related obesity and hypertension.

Thompson’s female mouse model has a mutation in one copy of the gene of the receptor for the satiety hormone leptin so tends to be somewhat overweight, even before pregnancy. Also much like many women, with pregnancy these mice develop glucose intolerance and high blood levels of insulin, glucose and triglycerides, Thompson said.

Their offspring seem similarly affected. By just three weeks of age, right after weaning, both males and females have more body fat than their normal peers, according to nuclear magnetic resonance spectroscopy, which accurately measures body fat. By six months of age, they also have high blood levels of fat, or lipids, a risk factor for cardiovascular disease and type 2 diabetes.

“Gestational diabetes and a big baby go hand-in-hand,” Thompson said. “They have been programmed to develop higher adiposity.” She logically suspects extra exposure of glucose and fat from the mother’s gestational diabetes is the initiator.

“We know that exposing adult animals to excess glucose, for even a short period of time, can induce epigenetic changes that can alter organ function,” she said. For example, it can contribute to vascular disease. “Just like in humans, this model seems to program a sort of metabolic syndrome phenotype so the next question is why? What is going on during development?”

A pregnant woman with gestational diabetes has high blood levels of glucose, which crosses freely to the disc-shaped placenta, but the higher insulin levels she is making to combat the high glucose cannot. The resulting high glucose levels circulating in the fetal blood prompt the developing baby’s pancreas to produce more insulin.

That’s where the increased size appears to come in. In utero, insulin works as a growth factor, while after birth it enables cells to use glucose for energy, Thompson said.

With support from the new grant, she is following the mice even longer to look for additional signs of cardiovascular risk, including inflammation in the blood vessels of offspring. She wants to see how blood vessels function in the offspring, since dysfunction is a key precursor to vascular disease. She wants to see how, after birth, additional risk factors, such as a high-fat diet, exacerbate disease risk. She’s also examining molecular mechanisms that result in their vascular vulnerability.

Farther down the road, Thompson wants to determine if the altered womb environment produces so-called epigenetic changes that alter protein expression and gene function. Markers of those changes might one day serve as early biomarkers that children are at increased risk for cardiovascular disease and diabetes.

Although genetics may be a factor, obese women are more likely to develop gestational diabetes when they get pregnant, Thompson said. Additionally, essentially every woman will become slightly insulin resistant during pregnancy. “They are already vulnerable and pregnancy is that extra stress that pushes them over,” Thompson said. In fact, gestational diabetes also increases the mother’s later risk of type 2 diabetes.