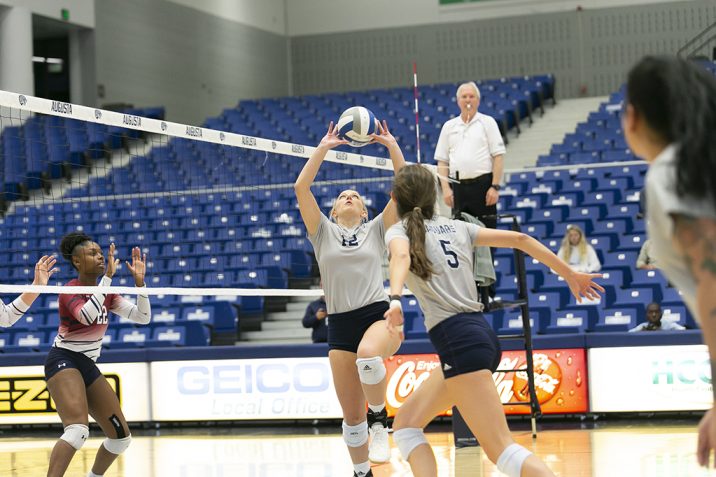 Augusta University’s volleyball team is a program on the rise and this year marks the third time coach Sharon Quarles has taken her team to the NCAA Division II Tournament.

This is the sixth time in program history, and the fourth time under Quarles, the Jaguars have won 20 matches in a season. They matched the 2014 team with 27 wins and will be facing a familiar foe in the Thursday, Dec. 5, first-round contest against Peach Belt Conference rival, USC Aiken.

“Coming into season, it was a basically a brand-new team. We brought in a handful of freshmen as well as a group of transfers. So just bring a collective group of 18 players on the court together to figure out what’s going to work the nucleus and then build around the backbone, which was our two returning middles, Jessica Hedrick and Chloe Allen,” said Quarles, who also took her squad to the NCAA Tournament in 2014 and 2018.

The Jaguars, ranked fourth in the Southeast Region, earned an automatic bid to the regional after winning their second consecutive PBC Tournament. They face the fifth-seeded Pacers for the fourth time this season. Augusta is 2-1 against USC Aiken this season. It lost the first match 3-1 on Oct. 19 but closed out the season with back-to-back 3-0 shutouts, including in the semifinals of the PBC Tournament.

“We definitely know each other’s strengths and weaknesses very well,” Quarles said. “But as I told my girls, right now we’re 0-0 … so is everyone else in the regional tournament. Saying that, I think we are very comfortable with this team. Yes, it’s our backyard rival. So there’s another little added little component that you throw into the mix there.”

“It’s a cohesive effort,” Quarles said. “It’s extremely nice because we’re not living and dying by one player … the pressure isn’t on just that one player. Yes, everyone is going to have their ups and downs, but there’s always another player that steps in and steps up.”

Quarles is 209-162 (.563) since being named head coach in 2009. She’s hoping her previous experiences in the NCAA Tournament as well as the team’s experience last year will help extend their season.

“I don’t think the girls will be shell shocked this year,” she said. “I think they have their feet underneath them. I think because of the veterans that we have on the floor playing … they’ve already been through it. So this is just a Thursday, five o’clock match for us.”

Quarles said the winning is helping with recruiting, which in her words is “always happening, 24/7, 365 days a year.”

“Last year was very solid, but we’re always looking for ways to improve, bringing in better players to kind of keep raising the level of the program,” she said. “That’s what’s going to build a program is key brand players that are going to challenge those returners and build a program that’s going to win, and we like to win.”

Third seed Carson-Newman will face sixth-seeded Anderson (S.C.) at noon, followed by No. 2 seed Queens against seventh-seeded Flagler at 2:30 p.m. Augusta and USC Aiken will square off at 5 p.m. Wingate, the tournament host for the first three rounds, is the No. 1 seed and will face eighth seed Emmanuel at 7:30.

The winner of the Augusta vs. USC Aiken match will face the victor of Wingate vs. Emmanuel. All matches will be available on ESPN3.