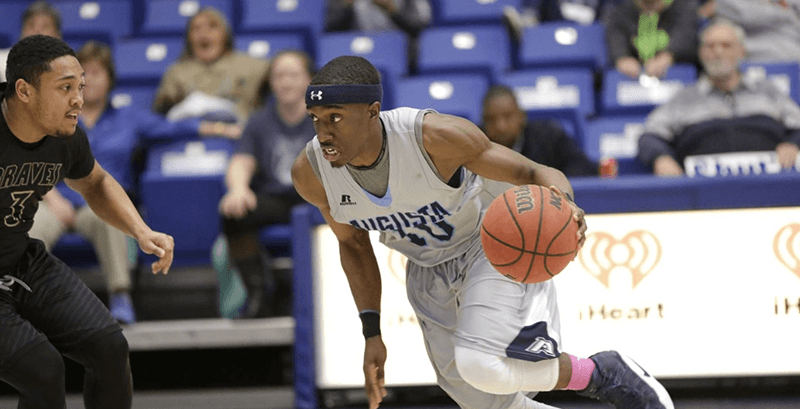 Hundreds of soldiers from Fort Gordon filled the stands for the annual event to honor our armed forces. New cadets were officially inducted into the military with a special swearing-in ceremony as the Jaguars took on the Braves.

UNCP was led by Akia Pruitt and Nigel Grant who each put up 16 points. Each team only made two three pointers on the day, but the Braves outscored the Jags 38-24 in the paint.

UNC Pembroke produced the first points of the game at the beginning of the contest, but the Jags jumped back to steal the lead and momentum. AU was on top 21-15 with 7:52 on the scoreboard in the opening half.

A pair of free throws from the Braves switched the score again and the game stayed tight down to the last second. AU led 36-35 at halftime with Monroe scoring 10 in the opening 20 minutes to guide the team.

The lead switched to UNCP with 13:40 on the clock when Watts banked in a bucket for a 46-45 score. The game remained tied at 54-all with just under 10 minutes, until Sherrill sunk a trey at the top of the arc. Another deep one from Sherrill made it 64-57 with 6:53, but Pembroke’s persistence had them back in a one-point battle with 4:30 to go.

The game was a one possession contest down to a minute, but the Braves fought off Augusta for the win.

Men’s and women’s basketball hosts the cancer awareness games on Wednesday, Feb. 8 against the Francis Marion Patriots. The women tipoff at 5:30 p.m. and the men follow at 7:30 p.m. in Christenberry Fieldhouse. The games serve to raise and awareness and support for the Georgia Cancer Center at Augusta University. All proceeds and donations go directly to the GA Cancer Center.

Written by Taylor Lamb
In the news: The Pursuit of Happiness
FacebookTwitterPinterestWhatsApp
Inclusion and diversity key to medical school’s success