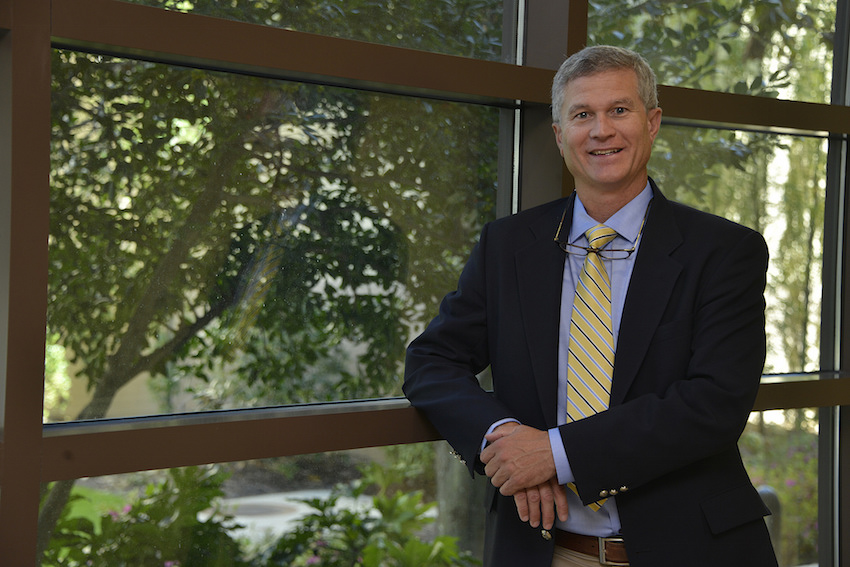 AUGUSTA, Ga. – Dr. Alan J. Herline, a colon and rectal surgeon who established and directed the Colon and Rectal Surgery Program at Vanderbilt University, has worked as an engineer and played professional football, is the inaugural J. Harold Harrison, M.D., Distinguished University Chair at the Medical College of Georgia.

Herline, a 1994 graduate of MCG, also has returned to his alma mater as vice chair of the Department of Surgery, chief of the Section of Minimally Invasive and Digestive Diseases Surgery and associate director of GRHealth’s Digestive Health Center.

The Harrison University Chair in Surgery is the first of 10 endowed chairs to be established through a $66 million gift by the late, renowned vascular surgeon and 1948 MCG graduate. Harrison and wife Sue’s gift also is enabling establishment of 48 scholarships for medical students. An additional $10 million gift supported construction of the medical school’s new academic home, the J. Harold Harrison, M.D., Education Commons.

“The largesse of Dr. Harrison and his wife Sue continues to transform the Medical College of Georgia,” said MCG Dean Peter F. Buckley. “We know that one of Dr. Harrison’s intents was to help his medical school attract and retain the absolute best faculty and students. In keeping with the amazing tradition of Dr. Harrison, we are so pleased that our very first Harrison Chair recruit is Dr. Herline, another very accomplished MCG graduate. We are actively recruiting other potential Harrison chairholders.”

Herline completed his general surgery residency at Vanderbilt University Medical Center, including a year as chief resident. He was a National Service Research Award Fellow in Vanderbilt’s Division of Hepatobiliary Surgery and the Department of Biomedical Engineering. Herline completed a colon and rectal surgery fellowship at the Lahey Clinic, now Lahey Hospital and Medical Center, a teaching hospital for Tufts University School of Medicine based in Massachusetts.

After earning an undergraduate degree in biomedical and electrical engineering at Vanderbilt, the high school and college football star played professional football for the Tampa Bay Buccaneers and the New England Patriots. The punter and placekicker loved the team spirit and meritocracy of football. He also worked as an engineering project manager for the Nashville, Tennessee architectural and engineering firm Gobbell Hays Partners Inc. Herline noted that his desire to identify and resolve engineering problems, readily translated to his ultimate desire to become a surgeon.  While a medical student, he earned the Peacock Gross Anatomy Award, the C.D. Whitaker Scholarship for academic merit, and was elected to the Alpha Omega Alpha national honor medical society.

As a colon and rectal surgeon, the strong advocate for disease screening plans to strengthen MCG’s and GRHealth’s clinical expertise and research in the third leading cause of cancer death in the nation. His clinical expertise also includes hemorrhoids, inflammatory bowel disease, diverticulitis, rectal prolapse and rectovaginal fistula. As an administrator and advocate for using minimally invasive approaches whenever possible, he will work with faculty across the Department of Surgery to further strengthen these offerings to patients as well as educational opportunities for residents. He also plans to put engineering colleagues across the University System of Georgia together with MCG physicians and scientists to enhance biomedical research opportunities.

“It’s exciting to see the commitment here to growth and to excellence,” Herline said.