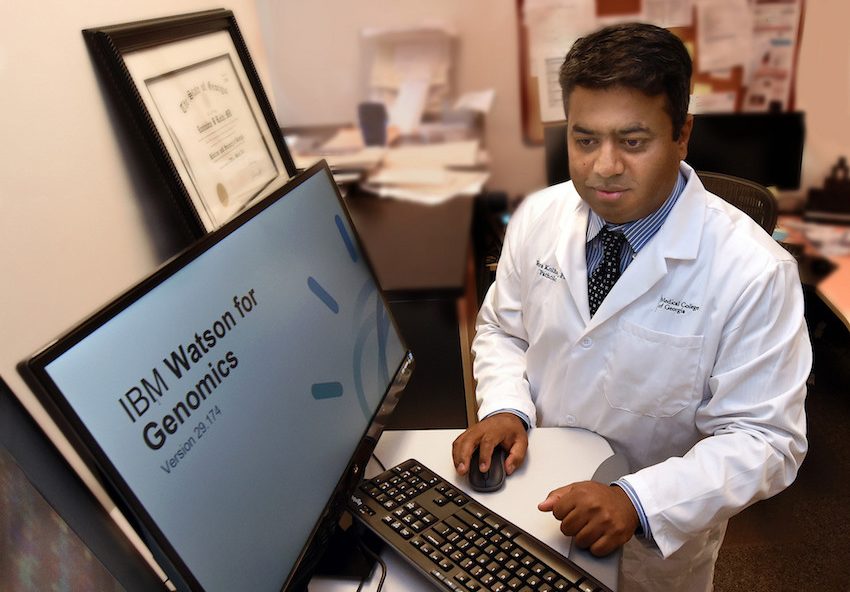 IBM’s Watson beat real-life contestants on Jeopardy. Now researchers are hoping this icon of artificial intelligence will help people with cancer win as well by providing a rapid, comprehensive report of the genetic mutations at the root of their specific disease and the therapies that target them.

“We have to change our whole behavior in looking at tumors. We are missing too much and too often treatment does not work for patients,” says Dr. Ravindra Kolhe, breast and molecular pathologist and director of the Georgia Esoteric & Molecular Labs LLC in the Department of Pathology at the Medical College of Georgia at Augusta University.

“With Watson, all oncogenes become targets,” says Kolhe, who is giving an update on Watson Genomic Analysis during the international Cancer Genomics Consortium Aug. 7-9 in Denver.

As an example, today a pathologist would analyze a melanoma biopsy for a single variation of the BRAF gene, which is present in about 50 percent of melanomas. There are drugs that directly target that mutated gene but if they don’t find BRAF, the patient will receive a more broad-spectrum chemotherapy regimen.

Watson, on the other hand, has the ability to rapidly identify multiple variations in BRAF along with variations in nearly a dozen other genes known to contribute to the skin cancer as well as the therapies to target them, Kolhe says.

“The majority of the time, we just tell patients they have a cancer,” Kolhe says.

He first worked with Illumina, a California-based biotech company that makes and markets systems to analyze genetic variations and biological functions, to validate the TruSight Tumor 170 Panel that gives Watson a broader cancer genomics perspective.

The panel provides Watson information on amino acid mutations – amino acids are a major component and factor in the function of the proteins our genes make and so their normal and cancer-promoting functions. It also provides known gene fusions or mutations, like those with BRAF, which can transform previously inactive genes into oncogenes on eight common cancers, like lung, colon, breast, prostate as well as melanoma. Many of these genes are a player in multiple cancer types, including those not currently on list.

Kolhe sequences DNA and RNA from a patient’s tumor, feeds the information to Watson, a question-answering computer system that, unlike traditional search engines, can gather evidence and analyze data but also generate knowledge.

“In about 20 minutes, Watson looks at what is abnormal in the sample, then takes the abnormalities and looks all around the world to see what are the drugs already used against them, what studies are underway against them, even other drugs out there that might be useful,” Kolhe says.

He likens the broadened perspective to the difference between looking down through a traditional microscope and up through a Hubble space telescope.

“At this moment we are looking at one thing at a time: a single amino acid and single gene fusion. Each gene has hundreds of amino acids and we’re looking at 170 genes so there is a tremendous multiplier effect,” he says.

Decisions about treatment clearly are still in the hands of physicians and patients, where they belong, Kolhe says, but Watson can make unprecedented information immediately available to make decisions about what treatment is best for an individual patient.

As an example, as one of many test runs, Watson provided Kolhe a 30-page assessment of a patient with a rare soft tissue sarcoma, that included mutations on seven genes, where the mutations are, what they are known to do and options for targeting them.

There also was a list of gene alterations that have no known therapies as well as gene mutations that were present, but their contribution to disease aren’t currently known.

It is those unknowns Watson comes across that might help researchers like Kolhe also identify new genetic contributors to a variety of cancers and make Watson a valuable scientific tool as well.

This type of comprehensive report might take 10 people 10 days to generate, if ever, Kolhe says.

In these early stages, Kolhe’s lab team and the IBM team are actually doing the labor-intensive work of manually combing databases like clinicaltrials.gov/ and ncbi.nlm.nih.gov/pubmed/ to double check Watson’s findings. “He is doing great,” Kolhe says. “We feed him good information and let him go on that.”

He hopes to start testing on current patients in September and the Illumina panels should be available to other pathologists about the same time.

“That is one of the frustrating parts about pathology. You can tell by looking that you have a cancer but we don’t know the oncogenesis or the way this malignancy happens,” he says, particularly when the current standard is one gene at a time.

“This is not getting to the cause, because something caused the mutations, but to the source – and hopefully the best treatment – of the tumor cells.”

Kolhe and Illumina have already developed a more extensive 500-gene panel that will take Watson many months to learn. Neither Kolhe nor the university will be compensated for the collaborations unless patentable discoveries, like new cancer causing genes, are made.