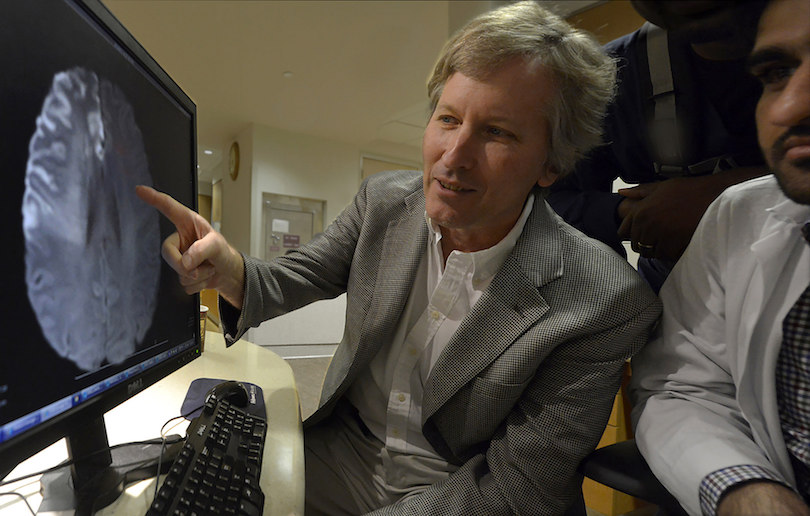 Dr. David C. Hess, stroke specialist, honored educator, biotech entrepreneur, and longtime leader at the Medical College of Georgia at Augusta University, has been named dean of Georgia’s public medical school and executive vice president for medical affairs and integration for the university.

Hess, chair of the MCG Department of Neurology since 2001, has served as interim dean and executive vice president since January. He is now dean of the nation’s 8th largest and 13th oldest medical school.

“I am honored to welcome David as the 27th dean of the Medical College of Georgia,” said President Brooks A. Keel. “Over the last several months, David has demonstrated tremendous skill in managing his interim role. His colleagues recommended him for the interim role, and their confidence was well-founded. I believe he is the leader who will help us do what is required to meet our goal of making MCG a top-50 medical school. David is a well-respected physician leader and an admired educator, who has effectively engaged our faculty and alumni to advance the mission of Georgia’s only public medical school.”

Hess earned his undergraduate degree in humanities from Johns Hopkins University and his medical degree from the University of Maryland School of Medicine. He then completed a neurology residency and cerebrovascular fellowship at MCG before joining the faculty in 1990. He is board-certified in internal medicine, neurology and vascular neurology.

“I have enjoyed the opportunity to work closely with my colleagues during this interim period. And I have seen firsthand the commitment of our talented faculty and staff. Teaching medical students has always been one of my passions, and we have an outstanding group of aspiring physicians and researchers on campus. I look forward to continuing the work of building on the already impressive legacy of MCG. I am grateful to Dr. Keel and Provost Caughman for the privilege of continuing my service to MCG in this role,” Hess said. “I love this medical school, this university and this state and consider them all my home.”

Hess is a longtime member of the American Stroke Association’s Telestroke Committee and just completed a term on the American Board of Psychiatry and Neurology’s Vascular Neurology Board Examination Committee. He has chaired multiple National Institute of Neurological Disorders and Stroke Clinical Trials Special Emphasis Panels. Hess is an associate editor of the journal Translational Stroke Research and an editorial board member of Stroke, Cell Transplantation, Brain Circulation and Stroke and Vascular Neurology.

His research, which has National Institutes of Health and private sector support, has focused on new therapies to improve stroke outcomes including use of bone marrow-derived multipotent stem-cell therapy and the potential of successive, vigorous bouts of limb compressions following a stroke to trigger natural protective mechanisms that reduce damage. He is on the steering or advisory committee of three international clinical trials of remote conditioning in neurological disease. Hess has more than 170 peer-reviewed publications.

In 2006, Hess co-founded REACH Health Inc., a company that packaged the need for rapid stroke care with the emerging capabilities of the internet to provide that care remotely. He is chair of the Board of Directors of the company, which received a 2012 Georgia Bio Community Award for its significant contributions to Georgia’s life sciences industry.

Hess received MCG’s Outstanding Faculty Member Award in 2012 and was honored with the Distinguished Research Award from the AU Research Institute the same year. He has been named one of America’s Top Doctors for the past 16 years. Hess is a member of the national honor medical society Alpha Omega Alpha and the Gold Humanism Honor Society. Hess was named Presidential Distinguished Chair in 2008.