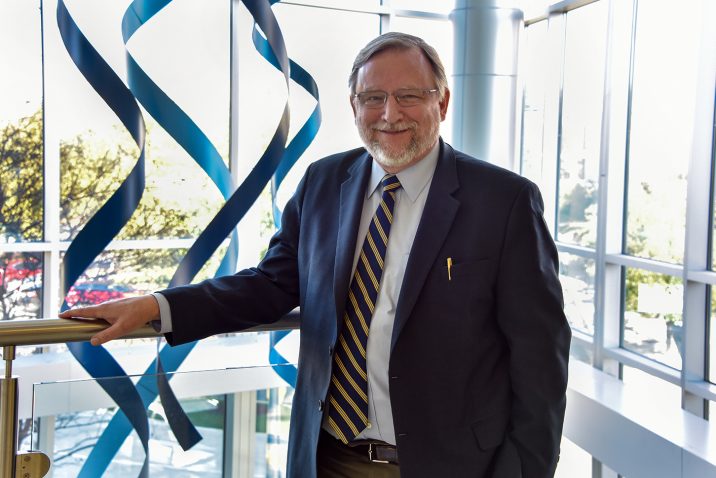 Dr. John Henson, former medical director of the Ivy Center for Advanced Brain Tumor Treatment at the Swedish Neuroscience Institute in Seattle, is the new director of neuro-oncology at the Medical College of Georgia and the Georgia Cancer Center.

Henson, a neuro-oncologist with more than two decades experience treating patients with brain tumors and other tumors of the nervous system, also served as director of the Swedish Neurofibromatosis Center and the Swedish Neuroscience Institute. He joins MCG as a professor in the Department of Neurology and the Division of Hematology/Oncology in the Department of Medicine. He is working collaboratively with the MCG Departments of Medicine, Neurology and Neurosurgery to develop new neuro-oncology services for the medical school and cancer center.

He also is establishing a Hereditary Cancer Clinic at the cancer center, which offers multidisciplinary risk assessment, genetic testing and counseling, and personalized surveillance and care coordination to patients and families with known or potential hereditary cancers, like breast and ovarian.

“The skillset that Dr. Henson brings to our cancer treatment programs is one that has been missing,” says Dr. Anand Jillella, chief of the Division of Hematology/Oncology in the MCG Department of Medicine. “With him at the helm of our neuro-oncology program we can focus on growing new research, exploring better treatment strategies and finding ways to improve the quality of life for patients with tumors of the brain and nervous system.”

“Dr. Henson brings a wealth of knowledge, enthusiasm and experience to Augusta,” adds Dr. Jeffrey Switzer, chair of the Department of Neurology. “He has an established track record as a clinician, researcher and director and will lead our brain tumor and neuro-oncology program to the next level. I’m excited that patients and families in Augusta and the surrounding region will have expanded access to novel treatments for cancers of the nervous system.”

He has also served in a variety of leadership roles in health care administration, including as associate chief medical director for the Swedish Neuroscience Institute, and as vice president of medical affairs at Swedish Medical Center’s Cherry Hill Campus in Seattle. In 2016, Henson was awarded the American College of Healthcare Executives Regent’s Award for Senior-Level Healthcare Leadership.

He is a former chair of the Pipeline Development Committee of the Network for Excellence in Neuroscience Clinical Trials, or NeuroNEXT, which is funded by the National Institute of Neurological Disorders and Stroke to conduct studies of treatments for neurological diseases through partnerships with academia, private foundations and industry. He also is a former member of the Board of Directors of the Georgia Center of Oncology Research and Education (CORE), a public-private partnership that connects cancer care providers, researchers, leaders, organizations and advocates across the state.

From 2017-18, he also served as an advisor to the National Cancer Institute’s Cancer Moonshot Accelerator Translational Testing and Training Laboratories (T3 Labs) in Atlanta.

Henson is past chair of the American Academy of Neurology’s Section on Neuro-Oncology and from 2007-09 was the science editor for the academy’s website. He serves on the editorial board of Neuro-Oncology Practice.

He earned his medical degree from Loma Linda University School of Medicine and completed a residency in neurology at Vanderbilt University Medical Center. He completed fellowships in neuro-oncology at Memorial Sloan-Kettering Cancer Center and diagnostic neuroradiology at Massachusetts General Hospital.