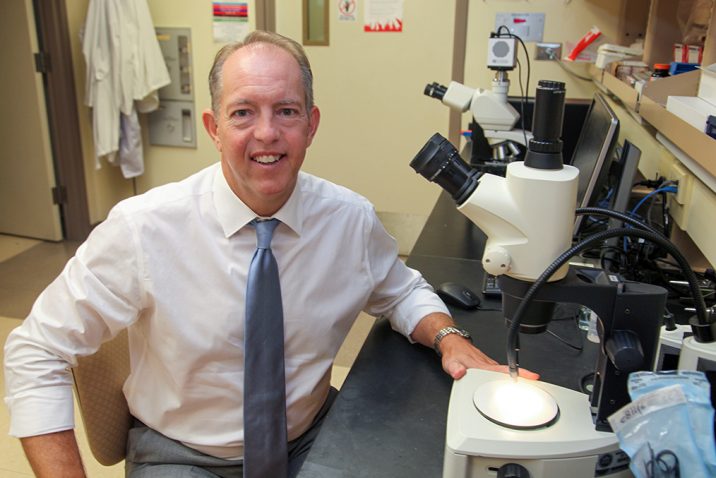 Dr. Mark Hamrick, bone and muscle biologist, federally funded investigator and honored educator and scientist, has been named senior associate dean for research at the Medical College of Georgia at Augusta University.

In his new position, Hamrick will work closely with MCG Dean Dr. David Hess and other MCG research leaders to develop a plan to move MCG toward the top 50 in National Institutes of Health funding. Among the nation’s medical schools, MCG currently is ranked 73rd by the Blue Ridge Institute for Medical Research, with nearly $48 million in funding. However, research funding grew to over $65 million last fiscal year, which should move that ranking to somewhere in the 60s.

He will work with MCG department chairs and center and institute directors to recruit and retain new federally funded research faculty and identify and develop new research collaborations across MCG departments, other AU colleges and with university and industry partners across Georgia and beyond.

“Dr. Hamrick was a natural choice to oversee the research efforts of the medical school,” Hess says. “He is not only a terrific collaborator and colleague, but also a strong mentor and role model for young scientists and a true advocate for the state’s only public medical school. I am excited to work with him to continue to grow MCG’s research footprint, not just in Georgia, but nationally and internationally.”

As senior associate dean, Hamrick, Regents’ Professor and George W. Weiss Research Professor in the Department of Cellular Biology and Anatomy, will also play a leading role in the assessment and allocation of research lab space on behalf of MCG, including planning for future space to align infrastructure needs with the goal of being a top 50 medical school.

Hamrick also is a co-investigator on MCG biomedical engineer Dr. Meghan McGee-Lawrence’s new NASA Space Biology Grant to examine how the plasma membranes of the bone cells of astronauts adapt during extended stays in space. Skeletal changes with spaceflight have long been known to exist. In a microgravity environment, because of reduced weight bearing, which stimulates bone building cells, there is increased bone resorption and no change in or even decreased bone formation, leading to bone mass loss at a rate of about 10 times that of osteoporosis.

He and Isales also are co-founders of Gerologix, a biotechnology company focused on the prevention and treatment of age-related muscle loss.

Hamrick led the graduate program in the Department of Cellular Biology and Anatomy from 2015-20 and has served on the doctoral dissertation committee of nearly 50 graduate students. He has served as a supervisor for first-year students participating the Medical Scholars Research Program since 2003.

Hamrick is a grant reviewer for the Department of Defense and has served on several recent musculoskeletal special emphasis panels for the NIH. He is an ad hoc member of the NIH’s Skeletal Biology Development and Disease and Musculoskeletal Tissue Engineering study sections and is part of NASA’s Directed Research Task Review Panel.

Hamrick serves on the editorial board of Experimental Gerontology and this year was co-editor of Special Volume: MicroRNAs and Bone in Bone and Special Volume: Mesenchymal Stem Cell Senescence and Rejuvenation in Frontiers in Cell & Developmental Biology.

Written by Jennifer Hilliard Scott
What will CRISPR, gene editing mean for generations to come? Our expert explains
FacebookTwitterPinterestWhatsApp
Finding its way to the top: How a cell surface receptor reaches its destination