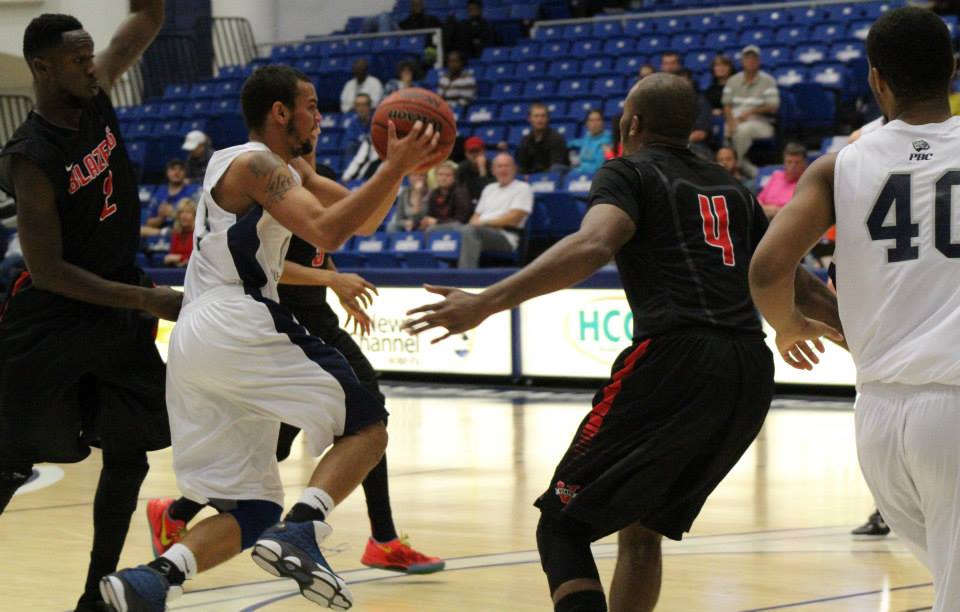 SAVANNAH, Ga.  – The GRU Augusta Jaguars had their six-game win streak threatened after a halftime deficit, but they survived overtime and beat the Armstrong Pirates 79-76 for their sixth consecutive Peach Belt Conference win Saturday night.

The Jaguars (18-5, 10-4 PBC) hit two free throws from senior Henry McCarthy to start their scoring on the night and ended a 5-0 Armstrong (6-14, 4-10 PBC) run. The Jags evened things at seven-all when Keshun Sherrill drilled his first three-point attempt. Devonte Thomas followed with another deep shot for a 10-7 swing in favor of GRU.

Sherrill led the Jags in scoring for the 12th time this season with 25 points. He added six rebounds and two assists, while Devonte Thomas posted 18 points, and Devon Wright-Nelson 11. Each team shot 48.2 percent from the field in the game, but the Jags two more free throws and outrebounded the Pirates 36-32.

Thomas found space on the perimeter again and hit a three pointer for a 15-11 lead, but the Pirates struck back on Nicholas Scott’s trey and Shaquiell Mitchell’s jumper to steal a 16-15 lead midway through the opening 20 minutes. The rest of the first-half scoring was within a four-point game until the closing minute when Armstrong took a 32-30 lead on Scotts three-pointer with 32 seconds left.

Sherrill had nine points to pace GRU in the first half, while Kelvin Howard had five early points off the bench. GRU attempted 14 three pointers in the first half and only made four, while shooting 39.1 percent from the floor to the Pirates’ 48.0.

After Devon Wright-Nelson’s jumper opened the scoring in the second half and netted the game at 32-all, the Pirates scored on their next three possessions to stay slightly ahead. A Sherrill trey with 15:29 got GRU within one point and another Wright-Nelson jumper tied the game.

GRU took their first lead of the second half 43-41 on Keith Crump’s layup. Thomas hit his third trey of regulation to build the GRU to eight, but Armstrong used a small run, sparked by Emmanuel Tiluscar, to climb back into the contest. The Jags were back ahead 66-61 with 2:52 remaining in regulation on a jumper from Wright-Nelson. Tiluscar made a basket and the Pirates forced two turnovers to find Scott who tied the game on a three-pointer with 1:20 to go. Each team answered baskets in the closing minute to force a 68-68 game in overtime.

GRU outscored the Pirates 11-8 in overtime to keep their six-game win streak in order. Wright-Nelson and D’Angelo Boyce made straight layups and Thomas’ jumper the Jags up 74-72. Wright-Nelson recorded a steal and found Boyce for another layup. Sherrill would draw fouls in the closing minutes and scored three at the charity stripe for the win.