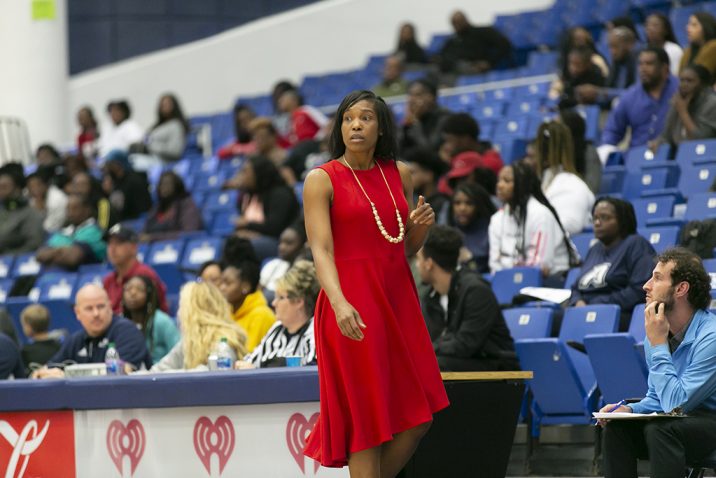 Even before the beginning of the college basketball season was delayed, there were so many questions about what a potential season would look like and how it would be played.

In November, Augusta University women’s coach Millette Green began preparing for a season that would include four fewer games and COVID-19 safety protocols. Although Green and her team are happy to be back on the court, today’s current situation has brought with it a time of reflection.

“The pandemic allowed us to reflect on many things in life, but we are talking about basketball right now,” said Green, who is entering her fourth year as the Jaguars’ coach. “We do not want to take any opportunity for granted. We are thankful for every day we have the opportunity to put on a jersey, lace up, and step foot on the basketball court to compete, practice, prepare or play.”

The season starts with a nonconference game Dec. 1 at Emmanuel (Ga.) College. Green said they have been playing 5 on 5 for the past three weeks but they still had to work up to those scrimmages once they returned to campus.

“We are still getting to know each’s strengths and weaknesses,” Green said. “The nonconference play will help us define roles, develop rotations, improve our on the floor chemistry, and identify what we need to improve on heading into conference play.”

Coach’s keys to the season

Green said the biggest challenge entering the season will be staying healthy. She said at one point in the preseason, they only had six players available for practice.

“The limited numbers did not stop us from practicing; we have to keep our eyes on the bigger picture,” Green said. “Our mindset is to take one day at a time and adjust when necessary to get the most out of what we can control.”

“Personally, every game is key for us, especially during this shortened season,” Green said. “Our nonconference schedule is very competitive with the South Atlantic Conference’s defending champions, Anderson (Dec. 12), as well as league opponents, UNC Pembroke (Dec. 5) and North Georgia (Dec. 8). Our conference schedule is reduced to 16 games with only four teams advancing to the conference tournament. Every game matters.”

The Jaguars will also travel to face Tuskegee on Dec. 19 and play host to Wingate on New Year’s Eve before starting conference play Jan. 6 at Columbus State.

Kennedi Manning, sophomore, 6 feet, 1 inch, forward: Green says she continues to develop as a dominant inside and out threat. Manning started 27 games last year and played in all 29 games. She led the team in total points, averaged 10.7 points per game and led the team in rebounds with 6.8 per game.

Zairya West, senior, 5 feet, 5 inches, guard: “She was our top perimeter threat last year. I expect her to be a consistent scoring threat on all three levels,” Green said. West started in 18 games for the Jaguars and led the team in scoring with an average 10.8 ppg. She shot 36.4% from the 3-point line for the season and made six 3-pointers in a game twice during the season.

Kiera Howard, junior, 5 feet, 5 inches, guard: “She is more experienced in her role as a point guard and she has the ability to facilitate, get to the free-throw line and score,” Green said. Howard played in 28 games and averaged 10.4 ppg, scoring in double digits 13 times.

Asia Harrison, junior, 5 feet, 7 inches, guard: “She will be an X factor this year. I have asked her to step in a new role at point guard position,” Green said. Harrison led the team in free-throw percentage (.875) and was third on the team in assists.

Jalea Gray (redshirt junior, 5 feet, 11 inches, forward) and November Morton (junior, 5 feet 10 inches, guard): “They are two transfers who I expect to make significant contributions this season,” Green said. “Jalea spent last year learning our system. She has the ability to play inside and out. November can stretch the floor with her perimeter shooting.”

The university announced Nov. 24 that outside fans will not be permitted to attend the men’s or women’s basketball games through at least Jan. 5.

“We are extremely disappointed in not allowing our tremendous fan base of Jaguar Nation to attend in person our non-conference men’s and women’s basketball home games,” said Clint Bryant, Director of Athletics. “It is our hope that we will be able to have home fan attendance by the start of the PBC regular season Jan. 6. We will keep everyone posted on our ability to make that happen.

“We are very excited to announce that Chad Cook and SUV TV will again provide live coverage of our contests. We are very fortunate to have the high-quality coverage that is provided through this relationship. As we all know, these are unprecedented times and your support and patience is much appreciated. Go Jags!”