Victor Piedra is graduating with a bachelor’s degree in kinesiology from the College of Education.

The importance of hard work

Victor Piedra’s parents have always been supportive of him, especially when it came to going to college.

His mother, Graciela Gomez, wanted him to pick a career that would make him happy.

Growing up, Piedra spent most of his free time with his father, Felipe Piedra, who taught him the importance of hard work.

“He always told me that whether or not I decided to work in construction or go to college, that it was important that I know how to do at least the simplest tasks instead of paying someone else to do something. That way I would know if it was done well or not,” Piedra said of his father.

However, as a Latinx male, he said some people in his life expected him to work in construction like his father. But he always knew he wanted to go to college.

“While I enjoy various aspects of construction, I knew I wanted to help others on a larger scale, and I know that as an occupational therapist, I can achieve that,” said Piedra, who will graduate with a Bachelor of Science in Kinesiology from Augusta University’s College of Education.

Piedra started attending AU in the fall of 2017. He said the first time he visited the campus was during a sneak peek tour during his senior year at Lithonia High School. The intimate tour allowed him to have more in-depth conversations with those he met on campus.

Two years later, he ran into his tour guide, who remembered him from their initial meeting.

“These were the interactions that assured me that I chose the right institution,” said Piedra, who also noted the smaller class sizes helped him create connections with both the professors and his peers. “With my peers, it was easy to coordinate study groups, and with my professors, it really meant a lot to me that they knew who I was. Whenever I needed help, the professors were able to carve out time to assist, and many of them served as great advisors/mentors.

“Creating connections is really important, and being able to get to know my professors was crucial during my college career, considering that many of them were more than happy to write me letters of recommendations, some of which I used to get into AU’s Occupational Therapy Program.”

Among the connections Piedra made was with Dr. Madison Kindred in the Department of Kinesiology. She said during the two years she has known him, she has seen Piedra grow not only as an academic, but also as an individual.

“I immediately think of the compassion Victor has for others, especially students in our department,” said Kindred, who is also Piedra’s advisor. “This past year, Victor recognized a need to increase information available for undergraduate students within the Department of Kinesiology who are interested in pursuing OT school. He assisted with organizing an informational session consisting of an expert panel.”

The panel included an AU OT faculty member, a current OT student and an undergraduate student who recently applied to OT school. Piedra served as the undergraduate panelist member.

“This online forum provided students the opportunity to learn about the application process and ask questions,” Kindred said. “Multiple students followed up with Victor after this session to ask questions.” Piedra remains curious to find ways to help others, a character trait Kindred said will serve him well as an occupational therapist.

“I have without a doubt become a better faculty member by having Victor in the classroom and as an advisee in my department,” she said.

“These were the interactions that assured me that I chose the right institution.”

Inspired to help others

Kindred said in her opinion, it’s important to have diversity in a variety of professions, but it is especially critical within the health care setting.

“There is a significant lack of OTs who are males and also people of color,” Kindred said. “It is important for other Latinx students to see Victor’s success in hopes they will be encouraged to pursue a graduate degree. Increasing representation in health care will improve patient outcomes and build stronger communities. In our department, Victor has served as a role model to our students. I especially hope his success will encourage Latinx students to pursue higher education — it is important for the health of people in our community.”

Piedra said he finds the human body “impressive” and wanted to further understand it. He said volunteering at events like the Costa Layman Health Fair solidified his decision to focus on kinesiology.

“Being able to help others, especially minorities who I can identify with, was very inspirational,” said Piedra, who has also served as a Resident Assistant for three years.

During his time at AU, he founded and was co-president of the Hispanic Organization of Youth. The goal is to unite the Hispanic population on campus and allow members to share their culture and traditions with both Latinx and non-Latinx members.

“I founded it because I noticed that there was a small population of Latinx students here on campus, and I wanted to make everyone feel welcomed, which was one of the reasons as to why I chose Tylin Siwemuke to be co-president, even though he is not of Latinx descent.”

One of the suggestions Piedra has for all Latinx students is find a mentor or a role model to emulate.

“Yes, you may have to work twice as hard to prove yourself and to get others to see past your ethnicity, but know your worth ultimately and remain humble,” he said. “You may find yourself doubting your ability to complete assignments or simply remain in college, so remember why you came here in the first place.”

Kindred’s hope for Piedra is that he continues to grow and progress in his field.

“Continue to follow your passions and remain curious as you enter graduate school,” she advised him. “Your moral character, compassion for others and rigor will drive your success. I am so proud of all of your accomplishments in the Department of Kinesiology and cannot wait to see what the upcoming years will bring.”

As Piedra reflects on his time at AU, he said it means the world to him to graduate as a first-generation Latinx student.

“My parents came to this country with nothing to provide me with opportunities that would not have been feasible in Mexico,” said Piedra. “Graduating from college is the least I could do to repay them for all of the sacrifices they made for me, even though I could never fully repay them.”

“I knew I wanted to help others on a larger scale, and I know that as an occupational therapist I can achieve that.” 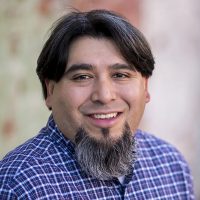 Miguelangelo Hernandez is a senior communications and media coordinator at Augusta University. You can reach him at mighernandez@augusta.edu or (706) 993-6411.
Like
Like Love Haha Wow Sad Angry
11