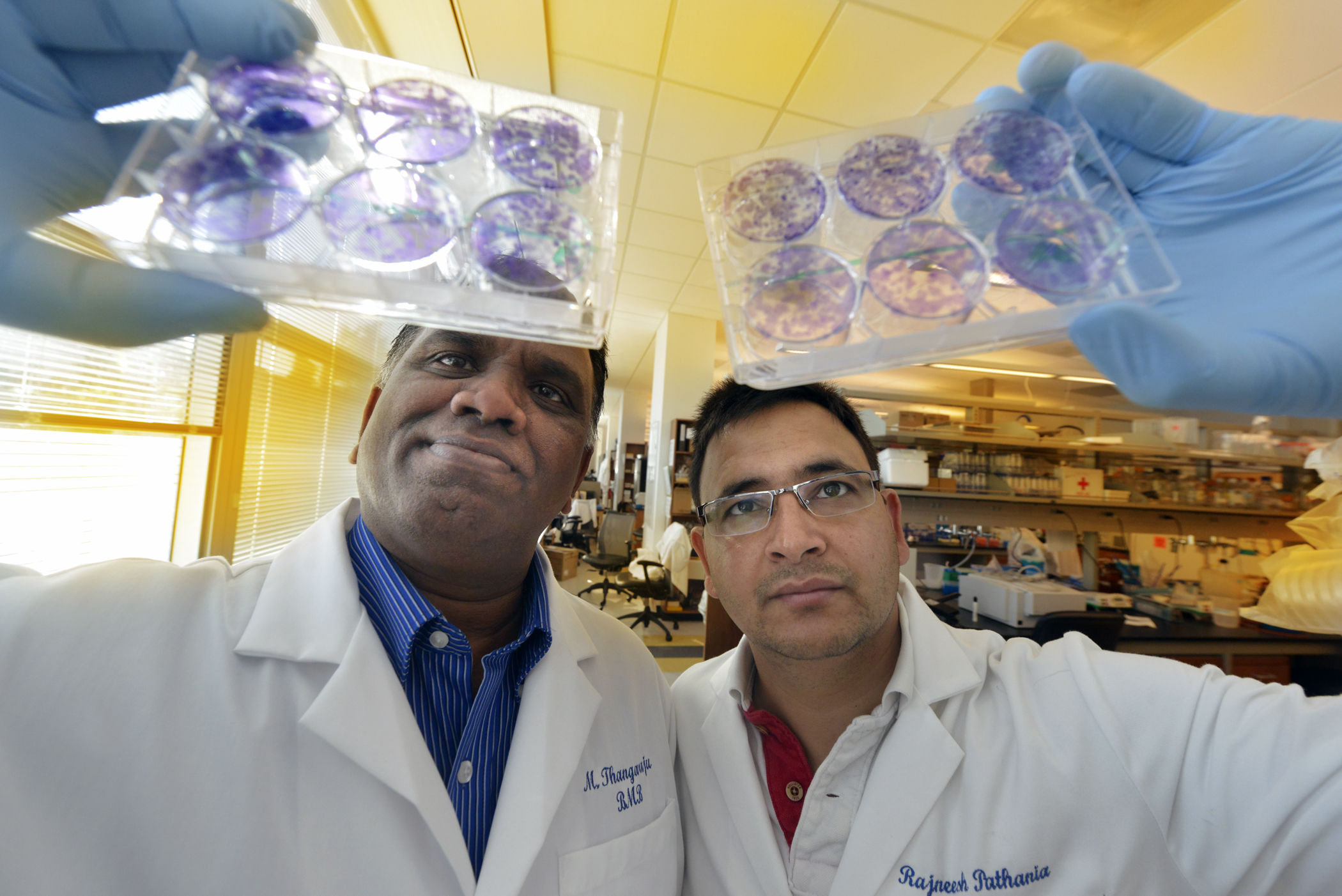 The gene and hormone soup that enables women to breastfeed their newborns also can be a recipe for breast cancer, particularly when the first pregnancy is after age 30.

Researchers have now found that the gene DNMT1 is essential to maintaining breast, or mammary,  stem cells, that enable normal rapid growth of the breasts during pregnancy, as well as the cancer stem cells that may enable breast cancer. They’ve learned that the DNMT1 gene also is highly expressed in the most common types of breast cancer.

Conversely, ISL1 gene, a tumor suppressor and natural control mechanism for stem cells, is nearly silent in the breasts during pregnancy as well as cancer, said Dr. Muthusamy Thangaraju, biochemist at the Medical College of Georgia at Georgia Regents University and corresponding author of the study in the journal Nature Communications.

“DNMT1 directly regulates ISL1,” Thangaraju said. “If the DNMT1 expression is high, this ISL1 gene is low.” They first made the connection when they knocked out DNMT1 in a mouse and noted the increase in ISL1. Then they got busy looking at what happened in human breast cancer cells.

They found ISL1 is silent in most human breast cancers and that restoring higher levels to the human breast cancer cells dramatically reduces the stem cell populations and the resulting cell growth and spread that are hallmarks of cancer.

When they eliminated the DNMT1 gene in a breast-cancer mouse model, “The breast won’t develop as well,” Thangaraju said, but neither would about 80 percent of breast tumors. The deletion even impacted super-aggressive, triple-negative breast cancer.

The findings point toward new therapeutic targets for breast cancer and potentially using blood levels of ISL1 as a way to diagnose early breast cancer, the researchers report. In fact, they’ve found that the anti-seizure medication valproic acid, already used in combination with chemotherapy to treat breast cancer, appears to increase ISL1 expression, which may help explain why the drug works for these patients, he said. The scientists are screening other small molecules that might work as well or better.

Mammary stem cells help maintain the breasts during puberty as well as pregnancy, both periods of dynamic breast cell growth. During pregnancy, breasts may generate 300 times more cells as they prepare for milk production. This mass production may also include tumor cells, a mutation that seems to increase with age, Thangaraju said. When the fetus is lost before term, immature cells that were destined to become breast cells, can more easily become cancer, said Rajneesh Pathania, a GRU graduate student and the study’s first author.

DNMT1 is essential for maintaining a variety of stem cell types, such as hematopoietic stem cells, which produce all types of blood cells. But, its role in regulating the stem cells that make breast tissue and enable breast cancer has not been studied, the scientists write.

While the exact reasons remain unclear, there is an increased risk of breast cancer if the first pregnancy occurs after age 30 as well as in women who lose their baby during pregnancy or have an abortion. Women who never have children also are at increased risk, while multiple term pregnancies further decrease the risk, according to the American Cancer Society.

Theories include that the hormone-induced maturation of breast cells that occurs during pregnancy may increase the potential for breast cancer cells to be made as well. Also, most breast cancers thrive on estrogen and progesterone, which are both highly expressed during pregnancy and also help fuel stem cell growth.

During pregnancy, stem cells also make more of themselves so their population increases about five times. DNMT1 levels experience a similar increase.

In five different types of human breast cancer, researchers found high levels of DNMT1 and ISL1 turned off. Even in a laboratory dish, when they put the ISL1 gene back, human breast cancer cells and stem cell activity were much reduced, Thangaraju said.