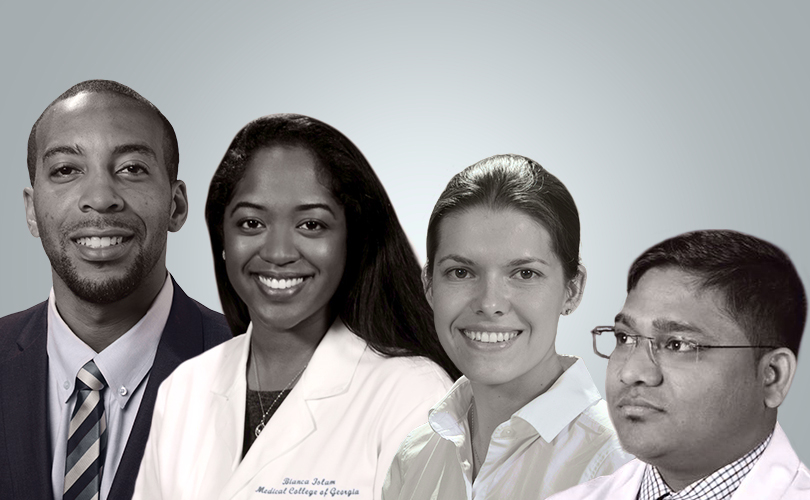 They are the leaders of tomorrow, making a name for themselves today and getting the attention of their superiors. And Augusta University is happy to be represented with four of the 10 members of Augusta Magazine’s “Top 10 in 10 Young Professionals to Watch” in 2017.

The Augusta Metro Chamber of Commerce and Augusta Magazine released their list on June 1. Dr. B.R. Achyut, Dr. Iryna Lebedyeva and Dr. Bianca Islam are the three current employees being honored this year. James Quarles, a former assistant men’s basketball coach at Augusta University, is also on the list.

The Top 10 in 10 Young Professionals list celebrates their professional accomplishments as well as their time spent in the community meeting the people they work for. The winners are entered into the nomination process for Georgia Trend’s “Top 40 Under 40” list.

“Community education is at the heart of cancer research awareness,” Achyut said. “Everyone should know about the good works happening at the Georgia Cancer Center. Being selected for the Top 10 Young Professionals list is an ultimate honor that will help in attaining that goal.”

Achyut and his wife moved to Augusta when he took the job at the Georgia Cancer Center three years ago after he completed a postdoctoral fellowship from the National Cancer Institute. Achyut is a member of a team of researchers working with Dr. Ali S. Arbab. His team studies glioblastoma as well as a metastatic form of breast cancer that can become resistant to medication in the cancer clinic.

“We are focusing on the critical problem of therapy resistance and successfully modeling them in our animal systems using mice and rat models,” he said. “Collaboration with the clinic is important, because clinicians can use printed materials to show patients the findings being made in basic research and how it could play a role in their treatment in the future.”

When it comes to research, Islam is using a drug known for helping men with erectile dysfunction and identifying it as a potential preventative for colorectal cancer in preclinical models. She’s one of the members of Dr. Darren Browning’s laboratory team studying the protective role of Viagra in a variety of gastrointestinal diseases and disturbances.

“Dr. Browning and I believe an important part of our job is to bridge basic science and translational research with clinical research to bring new treatment options to patients and their doctors,” she said.

Islam even spent time in Washington, D.C., where she lobbied U.S. senators and congressmen in the House of Representatives to increase funding for the National Institutes of Health and National Cancer Institute.

“I was one of 15 people from across the country taking part in that trip,” she said. “It was an opportunity to talk about research like what we are doing at the Georgia Cancer Center and why U.S. lawmakers should increase the amount of money the NIH and NCI can spend on finding ways to help cancer patients.”

Lebedyeva, a medicinal chemist in the College of Science and Mathematics, spends most of her time on the Summerville Campus in the Department of Chemistry and Physics, but her research into different kinds of compounds is tied directly to the cancer center down the hill. You can also find her in Science Hall teaching students medicinal chemistry in the fall and rational drug design in the spring. She’s spent three years at Augusta University doing research in the field of early drug discovery.

“Being named a Top 10 Young Professional is a sign of recognition for what we’re doing here and what we’re trying to achieve. An honor like this helps us know we are on the right path,” she said.

Lebedyeva, along with Dr. Kebin Liu, a member of the cancer immunology team in the Inflammation and Tolerance program at the Georgia Cancer Center, studies different compounds for their activity in inhibiting a resistant form of colorectal cancer. Her team works with other members of the cancer center to test various novel compounds to see if they are effective against different types of cancer.

“We have a lot of collaborations there,” she said. “We create compounds and have them tested to see if they’re active or toxic. If a compound is active, novel and unique, we then file for patents and grant applications.”

Lebedyeva, who is studying for her MBA at Augusta University, started a company with Liu, called CheMedImmune Inc., to promote novel compounds for cancer immunotherapy to potential buyers.

While James Quarles has moved on to a new job with Nicholls State University in Louisiana, he will also be honored during a luncheon on June 13. Quarles spent six seasons as an assistant coach for the Augusta University men’s basketball team. He also spent time teaching students about the importance of being healthy and active in their daily life. Quarles founded the Jocks and Gents mentoring program at Augusta University, a partnership between the basketball team and students at local elementary schools.

Augusta Mayor Hardie Davis will present all 10 recipients with an award to honor them for being selected as a young professional with a bright future. You can read more about all 10 winners on Augusta Magazine’s website.