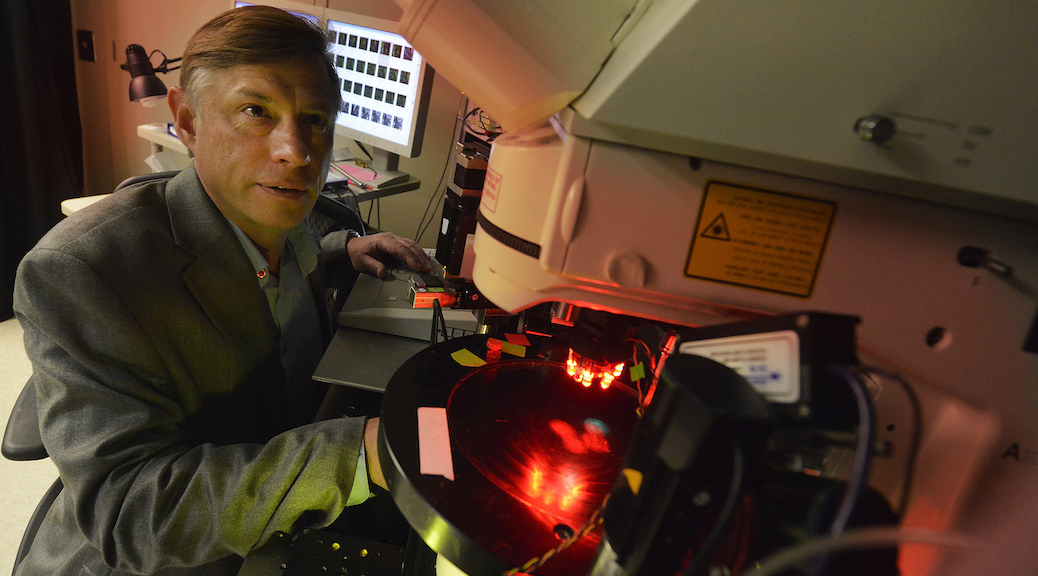 High-efficiency transporters that work like a shuttle system to constantly move ions into and out of neurons appear to slam into reverse following a stroke or other injury and start delivering instead too much water, scientists have found.

It’s called spreading depolarization, a wave of death that can follow a stroke or traumatic brain injury, as neurons and their extensions, called dendrites, become bloated, dysfunctional and vulnerable, said Dr. Sergei Kirov, neuroscientist in the Department of Neurosurgery and director of the Human Brain Lab at the Medical College of Georgia at Georgia Regents University.

While swelling is clearly a result of trauma to the brain, just how water gets into neurons was largely a mystery.

In a study published in The Journal of Neuroscience, Kirov and his colleagues report that a handful of these ion transporters – known to tote some combination of sodium, potassium and chloride – appear to be a missing link in how excess water gets inside.

“They act as molecular water pumps. This is a new way of thinking,” said Kirov. He and Dr. Nanna MacAulay, associate professor in the Department of Cellular and Molecular Medicine at the University of Copenhagen, are co-corresponding authors on the study, which is highlighted in the journal. These transporters also provide new drug targets for treating deadly edema.

Some water is routinely needed by neurons to carry out basic metabolic functions, but despite what some medical textbooks say, neurons are not freely permeable to water, Kirov said. “You need some molecular mechanism for water to enter or leave,” he said. The transporters, which are known to snatch up water and ions from outside the neuron, appeared a plausible option to Kirov.

The differential distribution of sodium and potassium also is essential for neurons to generate electrical signals, called action potential, and communicate with other neurons or cells so humans and animals can think or move or otherwise function.

When action potential is generated, a neuron goes through a process called depolarization, which alters its electrical charge so it becomes positive inside. Sodium channels open and small amounts of sodium move inside and channels rapidly close. The whole thing happens mega-rapidly.

During the repolarization that follows, the opposite happens: potassium channels open and small amounts of potassium move out of the neuron and those channels close. Once again, the sodium-potassium pumps push the ions back in their correct location. It’s a continuous, efficient process in the healthy brain.

But a traumatic brain injury, stroke, brain bleed or even a migraine can result in unrelenting, pathological spreading depolarization in which large amounts of sodium move inside and large amounts of potassium move out of neurons. Sodium-potassium pumps quickly get overwhelmed trying to straighten things out and neurons and their extensions, called dendrites rapidly find themselves in trouble.

While a swollen ankle may be uncomfortable, a swelling brain can quickly become deadly in the closed confines of the skull. “The normal balance of potassium and sodium during spreading depolarization is almost completely off so the normal function of the cell is off and it is at increased risk of dying,” Kirov said.

Kirov’s team used powerful two-photon laser scanning microscopy to study the function of transporters in slices of mouse brain and in mice. They watched the spreading depolarization and resulting swelling and documented how the edema was dramatically diminished by drugs that blocked the action of the transporters.

He notes that drugs he used in the lab can’t be used in humans, but like the transporters, they provide direction. “We need to develop better agents that will be safe in human patients that we can give for a short period of time and reduce swelling,” Kirov said of next steps in the research. Today, in severe cases of brain swelling, neurosurgeons will remove a piece of the skull to give the brain more room and ideally reduce permanent damage.

Kirov notes that astrocytes, another brain cell type that support neurons, have natural water channels, called aquaporins, so that water typically can more easily move in and out, but neurons don’t have these well-defined channels. “That was the puzzle,” Kirov said.

The research was supported by the National Institutes of Health, the American Heart Association and the Thorberg’s Foundation.