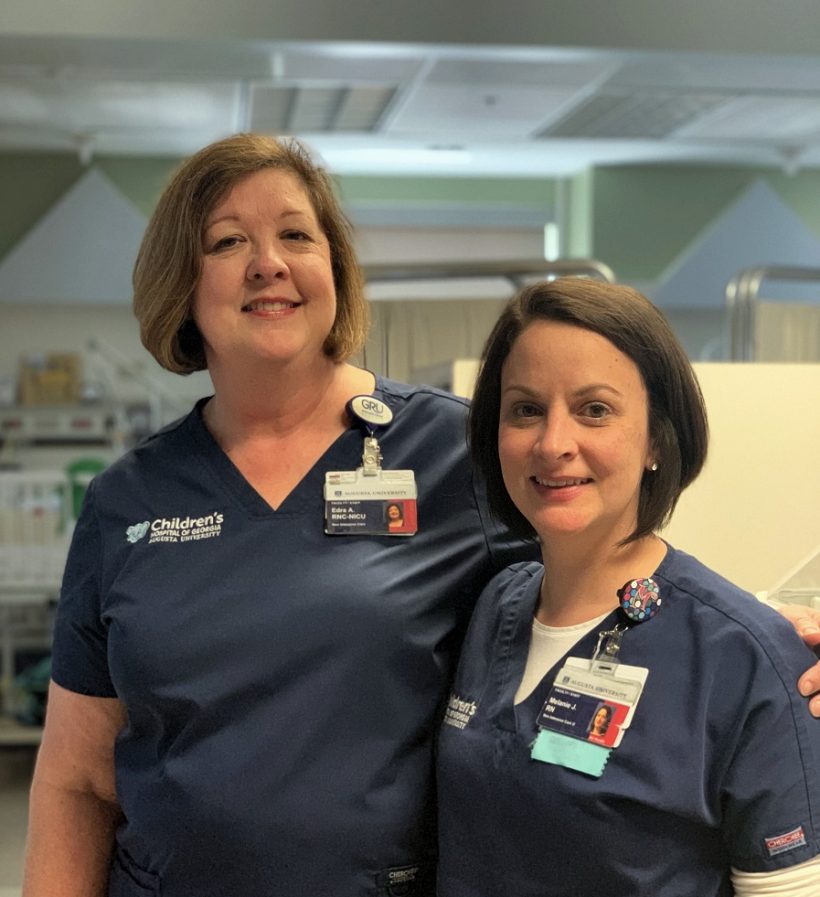 Edra Adams did not set out to become a Neonatal ICU nurse. But after almost 40 years, she can’t imagine what her life would have been like if she had not been one.

And she has her best friend to thank for it.

When she was at Berry College, Adams was considering going into teaching but said many of her friends who had graduated were having a difficult time finding work in their fields.

While she was considering her options, Adams learned about the Bachelor of Science in Nursing program at then Medical College of Georgia and proceeded to fill out her application. Although she had enough credits to transfer, doubt started to trickle into her thoughts about whether this was the right move for her, so she decided not to mail her application.

Her roommate at the time, Jane Dixon, whom Adams described as a “cleanup freak,” found the envelope and assumed she just forgot to send it, so she put it in the mail for her. A few weeks later, Adams received an acceptance letter.

“I was like, what? I didn’t apply, how did they know?” she said. “I didn’t have another plan at the time, so I just thought, well let’s go with it and see what happens.”

Adams quickly found out how good of a fit nursing was. During her senior year, a fellow nursing student told her she was leaving her assistant job in the NICU, and asked whether Adams would be interested in taking her place. Adams later interviewed and got the job.

She said at the time the NICU was a few converted patient rooms in the north wing of what was then known as the Talmadge Memorial Hospital.

“It was pretty primitive compared to what we have now but it was an amazing, miraculous place to me,” Adams said.

She said the biggest change she has witnessed during her time here has been how much they are able to help the babies now.

“When I first came here, we really didn’t try to save the babies that were less than 28 weeks gestation,” Adams said. “We know a lot more about how using pressures affects their lungs. We see babies much younger than that survive and go home and do great. The biggest change has been how much we’ve been able to do, respiratory-wise, for the babies.”

Ruth Wilson, nurse manager for NICU since December 2013, has been working here for 34 years. It didn’t take her long to figure out what a resource Adams was.

“I quickly determined that Edra combined her wealth of experience with practicality and dedication. She genuinely cares about patients and families.

“She seems to truly enjoy [her job],” Wilson added. “She is invested in making improvements and also growing our newer nurses. She is technically an expert, yet also caring and compassionate.”

When Adams first started working in NICU, she was 22 and didn’t know the emotional toll working there would take. She said she “probably hadn’t faced death many times before or ever” before working there.

“It was a huge learning curve,” she said. “What do you really know, when you’re that young, about life and emotions and things like that? I had a lot to learn. I was very young at the time so, no, I didn’t have any idea how intense things would get.”

There was time to adjust but after a while “You come to accept it.”

A quick tour around the NICU shows how passionate Adams is about her job, especially when she comes across a patient who has spent his entire life there. The satisfaction on her face and the sparkle in her eyes is noticeable when she talks about building the long-term relationship and caring for this patient, who isn’t able to talk yet.

As a family was preparing to leave the NICU with their child and a handful of nurses gathered around to say good-bye and wish them well, Adams pointed out that for the patients who stay a while, they become like family.

A lesson in empathy

Establishing relationships was difficult in the beginning because Adams didn’t have children. When she had her first son, Nathan, in 1981, he spent some time in the NICU and it change her entire perspective regarding her job.

“Starting out, I didn’t understand that child/parent relationship,” she said. “When [Nathan] was born, he was actually in the NICU for six days. And that was the absolute most terrifying experience of my life because I was a NICU nurse and knew all of things that could go wrong with him. I was scared out of my wits. He’s 38 now and in the military, and the time he was deployed to Iraq was the next most terrifying moment of my life.

“After that, it gave me a lot of empathy with parents, even though he wasn’t really that sick, but I understand what they are facing,” Adams added. “I particularly feel bad for parents from other countries that don’t speak the language. I think it’s extremely frightening for them. We have translators but they aren’t up here all the time. I’m sure it’s terrifying for them to look at their child, see how sick they are and not truly understand a lot about what’ going on.”

‘A miracle every day’

In September, she will celebrate 40 years of marriage to her husband, Robb. The couple has two more sons along with Nathan: Sam, 35, recently retired from the Marines, and Aaron, 32, is a pediatrician in the Army stationed at Fort Hood, Texas.

During her moment of reflection, Adams said she has been able to keep in touch with patients throughout the years, including fellow NICU nurse Melanie Jewett, who was one of the first babies Adams cared for as a new graduate nurse.

“She not only survived but grew up, went to nursing school and now has worked with me here for the last few years giving care and hope and comfort to babies and families every day,” Adams said.

Her college roommate turned into a lifelong friend and affectionately took credit for Adams’ career path.

“I never had a sister but she was like a sister to me,” Adams said of her friend, whom she honored with a brick in the Georgia Cancer Center after Jane died of cancer in 2009. “She was a great friend and we kept in touch for many years.”

And today, Adams can’t imagine what her life would have been like had she not gone into nursing.

“I can’t imagine why anyone wouldn’t want to do this,” Adams said. “I think it’s the best possible job I could have had. I love being able to help the babies; I love seeing them grow up. It’s just an amazing opportunity to see a miracle every day.”

Every gift, like every nurse, has the power to make a world of difference. Please visit Augusta University’s Nurses Week website to make your gift in honor of your favorite nurse or nursing staff. With your gift, you will be supporting furthering nursing education for current AU nurses.