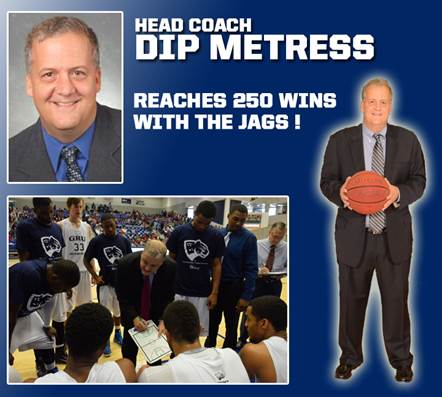 During the contest, GRU (21-5, 13-4 PBC) had its strongest offensive showcase of the season by scoring the most points in a game on 61.4 percent field goal shooting.

In the opening minutes, GRU scored the first four points, but FMU (13-13, 5-12 PBC) scored six straight points to take a 10-7 lead. Then McCarthy knocked down two free throws to tie it, and freshman forward Kelvin Howard canned a trey bomb for an 18-15 advantage.

At the 5:49 mark, sophomore guard Keith Crump found senior guard Devonte Thomas in the left corner for a three pointer, and on the ensuing possession sophomore guard Keshun Sherrill took a steal in for a layup to create a 32-24 affair in favor of the Jaguars.

The Patriots cut the deficit with a 6-0 run, but the Jags responded with six unanswered points for a 47-39 halftime lead. By the end of the first half, GRU had two players in double figures. Thomas had 11 behind three downtown shots and Sherrill scored 10 in the first 20 minutes.

GRU freshman forward Vlad Cobzaru knocked down a two-pointer 30 seconds into the second half for the first double digit lead of the game, 49-39.

At the 14:31 mark, Cobzaru sunk a layup as well to bring the score to 63-45. From that point forward, the Jags remained in full control to secure to victory. In the final seconds, Michael Graham brought down the two-handed jam to put the Jags over 100 points, and send the crowd into a frenzy.

Thomas paced the team with 21 points, which was followed closely behind Sherrill’s 19. Wright-Nelson also notched 14 points, and Cobzaru registered a season-high 13.

The Jaguars host Lander this Saturday, Feb. 21 for a 12:00 p.m. start in Christenberry Fieldhouse. The game will be nationally televised by CBS Sports Network in 100 million homes and will also be Military Appreciation Day, where 1,000 Fort Gordon soldiers will be in attendance. Doors open at 10:00 a.m. Saturday morning and a ‘Ring of Honor’ presentation for the soldiers will take place at 11:25 a.m. around the upstairs Chrstenberry Fieldhouse track, where fans will line the edges and recognize the military for their service.