“Danger” molecule may be new therapeutic target for male hypertension 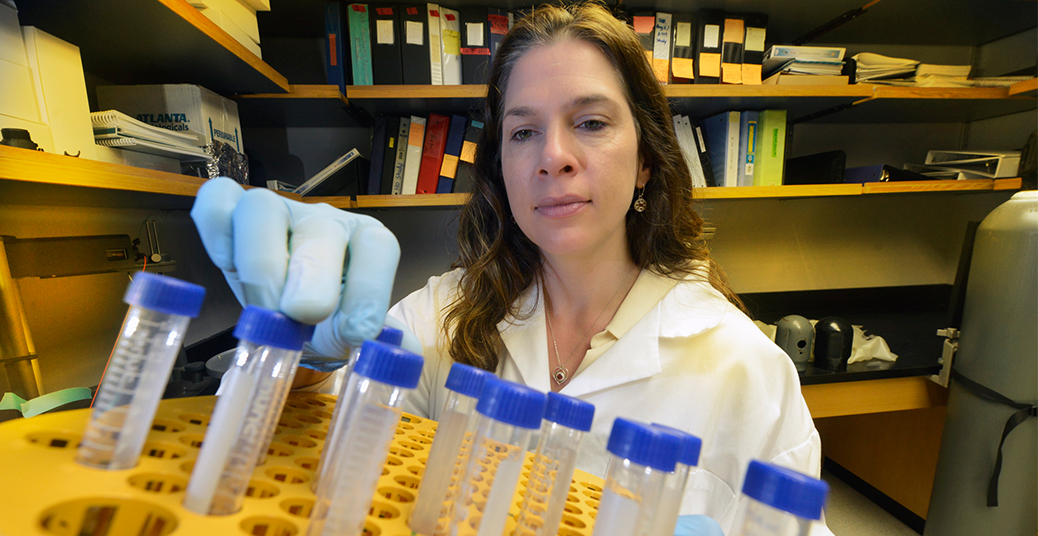 Higher levels of a “danger” molecule may be one reason males tend to become hypertensive earlier and more severely than females, scientists say.

They aren’t referencing a propensity to eat fried foods or drive fast cars, rather higher levels of the molecule HMGB1, which fuels inflammation and higher blood pressure.

Inside the cell nucleus, HMGB1 has an important job helping stabilize DNA. It’s when HMGB1 escapes, that it earns its danger moniker, said Dr. Jennifer C. Sullivan, pharmacologist and physiologist at the Medical College of Georgia at Georgia Regents University. Sullivan is Principal Investigator on a new American Heart Association grant that will help determine some of the gender differences in hypertension with the goal of improving treatment for the condition affecting about one third of American adults, only half of whom have good blood pressure control.

In both sexes, it takes some initial stimulus – such as the kidneys over-producing the blood vessel constrictor angiotensin II – to drive blood pressure up. The resulting chronic body stress means a variety of cell types, from kidney, to endothelial, to smooth muscle cells, start to die. In death, cells spill their contents, including HMGB1, into the bloodstream.

“You don’t want to have a lot of cellular debris in your body; you want to get it cleaned up, so HMGB1 is like a trigger for the immune response,” Sullivan said. “It’s going to activate your immune response just by being present.”

However, Sullivan’s research team has early evidence that, at least in rats, greater HMGB1 release occurs in males, where it likely contributes to a persistent hypertensive response, Sullivan said. Additionally, there’s evidence that in male experimental animals, immune cells, particularly T cells, which drive the immune response, are important to hypertension development. In fact, male mice missing T cells are resistant to initial stimuli, such as angiotensin II.

“We know T cells are activated; what is activating them has been obviously of great interest,” Sullivan said. “You are not going to be able to treat hypertensive patients with a broad-acting immunosuppressant,” because of increased risk of other diseases. “But, if we can figure out what is endogenously activating those T cells, maybe we can scavenge that up, neutralize it, and prevent the T cell activation from that particular signal.”

She’s betting that, particularly in males, it’s HMGB1 that’s activating T cells along with adhesion molecules that enable immune cells and other substances to get stuck to the blood vessel lining, multiplying the inflammation and vascular damage that can leave blood vessels unable to even dilate properly.

“If HMGB1 is what is causing that activation, then we know what to target, Sullivan said. “We are not going to cure whatever was the initiating event, but we are going to stop the vicious circle; we will stop perpetuating it.”

The AHA grant is enabling Sullivan’s lab to further test the hypothesis by giving a HMGB1 neutralizing antibody to both male and female rats to see how it affects blood pressure and vascular function.

“When we neutralize HMGB1 and prevent its ability to bind to its receptors, do we lower blood pressure, do we improve vascular tone and function, do we alter indexes of vascular health?” she said. To look specifically at HMGB1’s impact on adhesion molecule production and T cell activation, they are taking measures of both in the vasculature.

“You have immune cells floating around that would just be in your blood, but adhesion molecules will catch them,” Sullivan said. Some of these T cells are “angry” cells whose job is to kill invaders. When they get stuck to blood vessel walls, the protection goes awry.

While HMGB1 is not the initiator of hypertension, it could be an early target for intervention, particularly for some patients who can’t get their blood pressure under control even with multiple medications, Sullivan notes. None of the drugs currently used to treat hypertension directly target the immune response, but there’s already evidence that HMGB1 activates the immune response in stroke, acute renal failure and injury, as well as pulmonary hypertension.

One of the many differences between males and females is that females appear to recruit more of the suppressive T cells that can calm a potentially bad situation. In fact, clinical trials of a drug that stimulates production of these protective T cells are already underway in diabetes, which has many of the same deleterious effects on the vasculature.

Essential hypertension, where the cause is not absolutely clear, is the most common type of blood pressure problem in America, although there are clear risk factors such as genetics, inactivity, obesity, and a high-salt diet. Even with a plethora of drugs on the market, about half of patients, particularly women, have trouble maintaining a healthy blood pressure. A big barrier to better control is a lack of knowledge about molecular mechanisms driving higher blood pressures in both sexes, Sullivan said