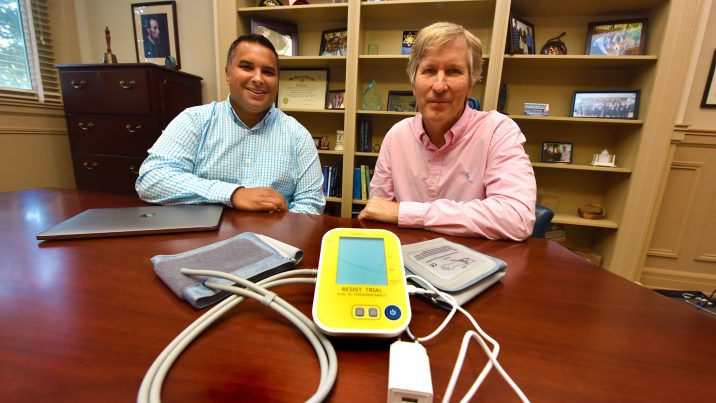 Successive bouts of compressing then relaxing a limb with a blood pressure-like cuff to prepare the brain to better weather the lack of oxygen that occurs in stroke is one of six approaches being evaluated in the first national, head-on comparison of potential new stroke therapies.

The National Institutes of Health is funding the novel initiative called the Stroke Preclinical Assessment Network, or SPAN, that seeks to efficiently identify treatments that hold the most promise, and has seven labs across the nation working collaboratively to make that happen.

Dr. David Hess, stroke specialist and dean of the Medical College of Georgia at Augusta University, is project leader on studies of remote ischemic conditioning, an approach he has been pursuing in the laboratory and limited human trials.

Other agents being assessed side-by-side in SPAN include an anti-cancer drug; a blood vessel dilator; an immunosuppressive drug used to treat rheumatoid arthritis; uric acid, a waste product of the body, that can be a sign of gout at high levels but also is an antioxidant that may reduce stroke damage; and an immune system modulator currently used in multiple sclerosis.

Remote ischemic conditioning is the only device in the lineup; all the drugs under evaluation already are approved by the Food and Drug Administration for other conditions.

SPAN is enabling testing in multiple labs of the approaches but with consistent stroke models and laboratory standards that ensure results are comparable between them, say Dr. Kris Dhandapani, neuroscientist in the MCG Department of Neurosurgery and a co-investigator with Hess. The studies in rodent models will be conducted similar to human trials of new drugs like the randomization of treatments used.

Many laboratory studies in stroke and other maladies show great promise that does not ultimately translate to better patient outcomes, Hess notes. One of the many goals of this organized network is to improve the chance that they will.

“These labs have produced a lot of great ideas and promising preliminary data,” says Dr. Walter J. Koroshetz, director of the NIH’s National Institute of Neurological Disorders and Stroke. “It is our duty to patients to develop a system that rigorously tests and translates those ideas more effectively from bench to the bedside,” Koroshetz says.

“We are fortunate to be a part of this innovative approach by NIH to find new treatments that ideally help reduce stroke size and improve patient recovery,” says Hess. MCG will receive a $1 million grant from the NIH to enable its participation over three years.

The two existing treatments for an ischemic, or clot-based, stroke include giving the clot dissolving drug tPA within four-and-a-half hours of stroke onset, and a procedure, called mechanical thrombectomy, to physically extract the stroke-causing clot within 6.5 hours of onset.

SPAN specifically seeks to identify treatments that enhance the effectiveness of mechanical thrombectomy, an intervention used in some of the worst scenarios at stroke centers like AU Health System, where stroke likely will result in death or major, permanent disability.

While mechanical thrombectomy can enable some patients to fully recover from a potentially catastrophic stroke, even go home the next day, about 50 percent of patients remain disabled three months later, Hess says.

“We would love to find adjunct treatments that will further enhance the effectiveness of this procedure and enable more patients to return to their usual lives,” he says.

The MCG investigators say remote ischemic conditioning is an inexpensive, noninvasive essentially side effect-free adjunct treatment that could be started as early as in the ambulance ride to the hospital.

They have evidence remote ischemic conditioning works in a model of both an ischemic stroke, the most common stroke type, as well as a hemorrhagic stroke, a bleeding in the brain that also destroys brain tissue. Hemorrhagic strokes account for about 15 percent of strokes but are responsible for about 40 percent of stroke deaths, according to the National Stroke Association. While SPAN focuses on clot-based strokes, for remote ischemic conditioning to work safely during the ambulance ride before the stroke type is known, it had to work for both types, or at least not increase problems, Hess says. He and Dhandapani were concerned it would actually increase bleeding in a hemorrhagic stroke.

“We found just the opposite,” says Dhandapani of results published last year in the Journal of Experimental Medicine. “We found it was actually changing the immune response, making it more anti-inflammatory,” as they watched macrophages and white blood cells scavenging the destructive blood from the brain. “Within one day you could see improvements. That was totally unexpected,” says Dhandapani.

Repetitive compression of an appendage also helps trigger endogenous protective pathways that will help the brain better weather a more significant attack. The MCG investigators have evidence the conditioning can reduce inflammation — as they saw in the hemorrhagic model — including protecting brain cell powerhouses, called mitochondria, and reducing production of destructive oxygen free radicals. It also appears to improve the ability of red blood cells, which carry oxygen, to change shape so they can more easily maneuver through often microscopic and diseased blood vessels.

Large stroke prevention trials are underway in China using remote ischemic conditioning and Hess is on the steering committee of a study in Denmark using the technique in the prehospital care of 1,500 stroke patients.

Cedars Sinai Medical Center in Los Angeles is SPAN’s coordinating center. Other sites include the University of Texas Health Science Center in Houston, Massachusetts General Hospital in Boston, Johns Hopkins University in Baltimore, the University of Iowa in Iowa City and Yale University School of Medicine in New Haven, Connecticut.

Stroke is a leading cause of death and long-term disability in the United States. Risk factors include high blood pressure and cholesterol, smoking, obesity and diabetes and risk increases with age.