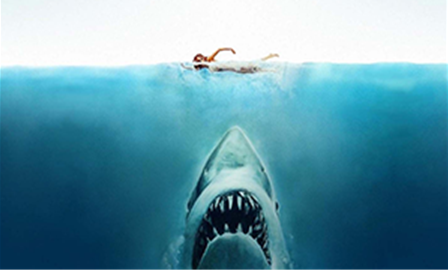 It’s that time of year again. As the spring semester comes to a close, the Cinema Series at Augusta University brings you another classic. This time around it’s an oldie, but a goodie: Steven Spielberg’s 1975 shark-battling, beach-watching, bigger-boat-needing thriller “Jaws.”

Jaws is a movie that needs no introduction. The film that made Steven Spielberg a household name has been a staple of holiday cable television fare for years. If you’ve somehow managed to miss it, though, here’s the rundown:

A young woman’s mysterious death leads to a string of attacks off the coast of Amity Island, a small, New England tourist town. After a long bout with the town’s mayor about closing the island’s beaches to find the obvious culprit–a massive shark–the town’s Police Chief Martin Brody is overruled, and the tourist season continues uninhibited. Until the next attack, that is. Soon, the small town of Amity is thrown into a panic, and an amateur team of shark hunters is put together to bring the killer shark down. The chase that results has since gone down in cinema legend.

Following Jaws, the Super Secret Cinema Society (SSCS for short) will present a super secret screening. Not a member of SSCS? No worries. Attendees will be able to join at the door.

This screening is presented by the Cinema Series at Augusta University and the Department of Communication.