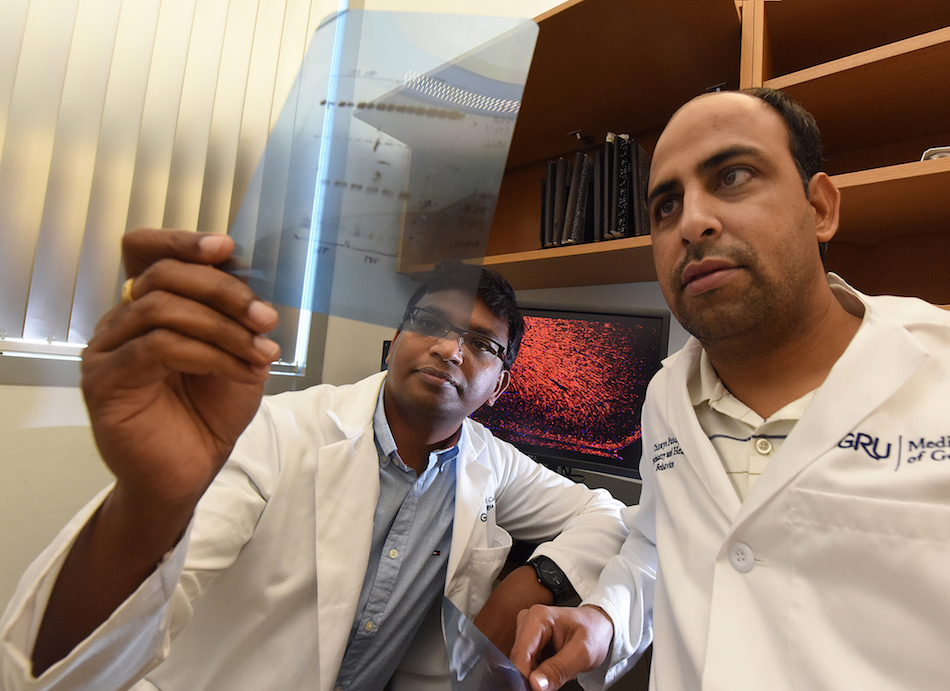 One way chronic stress appears to cause depression is by increasing levels of a protein in the brain that decreases the availability of an important chemical that regulates our mood, scientists report.

They have found elevated levels of transglutaminase 2, or TG2, in the brains of mice experiencing chronic stress – an animal model of depression – as well as the prefrontal cortex of depressed people who committed suicide.

High TG2 levels in the mouse translated to atrophy of neurons, depression-like symptoms and reduced levels of TrkB, the receptor for brain derived neurotrophic factor, a brain-nourishing molecule that also aids connectivity, said Dr. Anilkumar Pillai, neuroscientist in the Department of Psychiatry and Health Behavior at the Medical College of Georgia at Augusta University.

When scientists overexpressed TrkB, it relieved the depression-like symptoms in their animal model. “If you don’t have enough BDNF, then all the serotonin in the world won’t help,” said Pillai, corresponding author of the study in the Nature journal Molecular Psychiatry.

Likewise, when they directly reduced TG2 levels using a drug or a viral vector, more BDNF signaling occurred and depressive symptoms abated, said Pillai, who suspects that the protein may be a powerful new target in the fight against depression.

They found TG2 levels increased in their animal model following administration of stress hormones and after several weeks of actual stress that mimics the lives of chronically stressed individuals. Both produced classic depressive behavior and increased TG2 levels in the prefrontal cortex, a region involved in complex thoughts, decision-making as well as mood and personality expression.

Serotonin is a major neurotransmitter in the brain involved in many functions, including mood regulation. Serotonin levels in a depressed patient’s blood should be high because serotonin signaling in the brain is low, Pillai said. Blood levels can be used to help diagnose the condition that affects about 350 million people worldwide and is the leading cause of disability, according to the World Health Organization. Many cell types make serotonin. Interestingly, the vast majority of serotonin is made in the gut, but neurons do make some of their own, Pillai said.

Astrocytes make BDNF, whose levels are also low in depression. Although just how the two work together is an unfolding mystery. In this study, Pillai and his team further linked them by showing that treatment that increases serotonin availability – as most antidepressants do – also increased levels of the BDNF receptor thru the action of RAC1. TG2 converts serotonin to RAC1, a protein that helps rejuvenate the BDNF receptor, TrkB.

Now the MCG scientists have shown that in depression a healthy balance of all these is upset, as elevated TG2 makes less serotonin available, leaving insufficient levels to enable proper communication between neurons. The brain also is more vulnerable as the increased level of activated RAC1 is inexplicably degraded, which leads to less instead of more BDNF signaling.

“Increased amounts of TG2 will eventually lead to decreased levels of RAC1, and BDNF signaling is just not happening,” Pillai said.

Next steps include looking for other drugs that lower TG2 levels. For the study, researchers used cysteamine, whose clinical uses today include treatment of a rare genetic condition in which a buildup of crystals can cause kidney failure. Unfortunately, the drug creates an odor that has patients bathing multiple times daily. They also want to directly measure serotonin levels following treatment, although Pillai notes that increased BNDF signaling should be significant to alleviate symptoms.

The research was funded by the National Institutes of Health. Assistant Research Scientist Dr. Chirayu D. Pandya is the study’s first author.