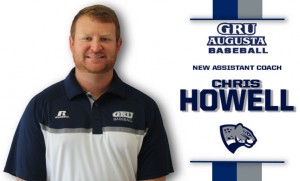 Howell comes to Augusta and the CSRA after spending last season in the Peach Belt Conference as a top assistant at Young Harris College. In the 2013 and 2014 seasons, Howell enjoyed a stint at Middle Georgia State College as an assistant coach. Howell was the pitching coach and recruiting coordinator for the Knights during those two seasons and coached current GRU players Matthew Kuhlenberg, Cole Thompson, and Drew Taylor while with the MGA Knights.

“Coach Howell brings a pitching plan that is one of the best in the state of Georgia,” Head Coach Jason Eller said. “(Chris) is the ideal addition to the GRU baseball program as we continue to work our way onto the map”.

Howell began his coaching career at his alma mater Tiftarea Academy – a private school in Chula, Ga. During his four-year stint with the Panthers baseball program, Tiftarea won the 2009 GISA Class AA State Championship and was runner-up the following year. Howell garnered state coach of the year accolades in 2009 and Region 3-AA Coach of the Year honors in 2009 and 2010 while at Tiftarea.

“I’m excited to be a part of GRU Augusta and the direction of Coach Eller’s baseball program,” Howell said. “The unlimited resources and facilities brings passion to Augusta and that excites me.”

A native of Fitzgerald, Ga., Howell was a three-time, all-state and four-time, all-region player at Tiftarea before starting his college career at Pensacola Junior College. He pitched two years in the Panhandle Conference and furthered his career to the University of Tennessee where he pitched two years for the Vols. His career with the Vols ended strong by helping his team advance to the 2005 College World Series in Omaha, Neb., as a senior.

After college, Howell pitched two years professionally for the Los Angels of Anaheim organization. He earned his bachelor’s degree in education from Tennessee and an associate degree from Pensacola.