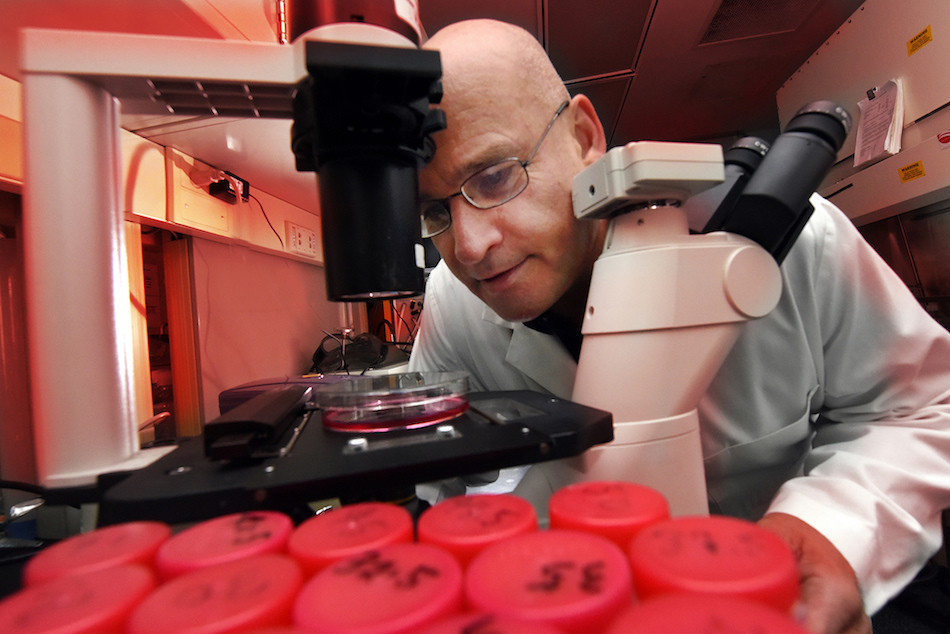 A long version of waxy, fat-like ceramide appears critical to helping brain cells called astrocytes stay focused on supporting neurons rather than contributing to their demise.

Two new grants totaling about $4 million from the National Institutes of Health are helping scientists at the Medical College of Georgia at Augusta University learn more about how this good ceramide is made as opposed to a shorter version that ultimately enables the hallmark, destructive plaque of Alzheimer’s.

“We want to help people avoid or a least reduce the neurodegeneration that comes with this disease,” said Dr. Erhard Bieberich, neuroscientist in the MCG Department of Neuroscience and Regenerative Medicine and principal investigator on the new grants.

In this complex process, it’s actually comparatively easy for Bieberich at least to see that something is amiss, because when it is, astrocytes will lower their antenna, a solitary protrusion called a cilia, that’s centrally located on all healthy mature brain cells like a periscope on a submarine.

“If you looked at a developing brain or the brain of a patient with Alzheimer’s or even cancer, the cilia would be missing because cell division is going on,” he said. “In a healthy, mature brain, you need to have sensory organelles like cilia turning growth factors off and instead finding the best position around the neuron to be nurturing,” he said.

That’s how cilia also become like a flag that’s flown when the astrocyte is being helpful and lowered when it’s causing problems. “Bad astrocytes don’t have cilia; the good ones do,” he said, which brings him back to ceramide.

His lab found about six years ago that cilia are, in fact, coated with the much-publicized lipid, which interacts with still unidentified proteins to mediate cilium growth. His team has since uncovered mounting evidence that bad ceramide translates to bad astrocytes because shorter ceramide cannot support the cilia. While still uncertain what determines which ceramide gets made, right now he wants to better understand just how the lipid regulates cilia on brain cells and how dysregulation leads to problems such as chronic inflammation and eventually diseases such as Alzheimer’s. He also wants to identify what he believes are the different sets of proteins long and short ceramide bind to. The ultimate goals of Bieberich and his research team include restoring production of healthy ceramide and cilia in the face of these diseases.

In the healthy brain, cilia sense growth factors that keep astrocytes “quiescent,” so they don’t divide, rather do some selective traveling to tend to whatever neurons are most active at the moment. Their support is vital to healthy neurons, which don’t have a direct blood supply. So, astrocytes function like a mobile gas station that pulls up to active neurons, ensuring they get blood, glucose and other essentials. When the cilia go down, the astrocyte instead focuses on itself and dividing. “If an astrocyte is dividing, you can imagine it uses all the fuel up for itself,” Bieberich points out.

In fact, astrocytes can’t divide and nourish simultaneously because the same molecular machinery necessary to make a cilium also is needed to enable cell division. “When you have a cilium, you have no division,” he said. And when you have division, these now reactive rather than quiescent astrocytes also become inflammatory, which has Bieberich wanting to know whether cilia also are important in controlling inflammation. He already knows that without their iconic antenna, these cells shed cytokines, immune cells that promote inflammation, as well as growth factors that do the same. He also already has some evidence that when inflammation is present, cilia are not.

“We think by manipulating ceramide metabolism, creating the right ceramide so to speak, we can reinstall ciliogenesis,” Bieberich said. “We can convince the cell to return to the quiescent state.” The new grants will help further explore how to achieve that, including learning more about how good ceramide is made so they can figure out how to turn it on in disease states like Alzheimer’s. He already has evidence that there is plenty of bad ceramide in this disease.

But all the blame doesn’t fall on misguided astrocytes. Healthy neurons don’t make much amyloid, but when they become mutated or experience metabolism problems, they can start secreting more of these essentially misfolded proteins that no longer perform their usual function and instead can hurt astrocytes and other cells. Bieberich’s team has shown that in response, astrocytes form fluid-filled vesicles to trap the amyloid, much like an efficient garbage collection system.

“Healthy astrocytes don’t make vesicles. You have to dump amyloid on them, put cytokines on them, and then they make exosomes,” he said referencing the amyloid-engulfing vesicles astrocytes make to protect themselves. In fact, vesicle formation also is one of the first reactions to accompanying inflammation.

Still it’s a good system that can actually protect the brain as natural garbage consumers, like  macrophages, then come along to eliminate the accumulating debris. But the system also can become overwhelmed, which is how the hallmark plaque of Alzheimer’s begins to accumulate and ultimately damage and destroy neurons. Bieberich equates the scenario to an over-full landfill that simply cannot handle more waste. If he can one day enable production of more good ceramide, it should improve the now-destructive cycle so vesicles and excessive plaques don’t get made but cilia do.