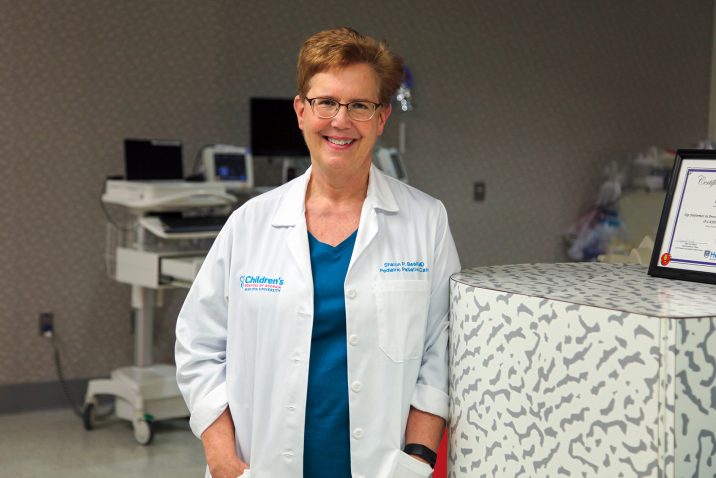 Dr. Sharon Beall, a pediatrician who specializes in the care of children who are living with life-limiting conditions, has been named medical director for the Pediatric Palliative Care and Hospice Program at the Children’s Hospital of Georgia.

Beall, a 1990 graduate of the Medical College of Georgia, is also an associate professor in the MCG Department of Pediatrics. Before coming back to the medical school and Augusta University Health, she was lead hospice physician at Hands of Hope, the pediatric program of AgapeCare Hospice, which provides in-home pediatric palliative care and hospice services across South Carolina.

Pediatric palliative care is a branch of medicine that focuses on relieving the symptoms and the often accompanying stress of illness with the goal of improving the quality of life for both the child and their whole family. Pediatric palliative care teams are typically comprised of specially-trained doctors, nurses, social workers, chaplains and child life specialists that add an “extra layer of support” for patients and their caregivers. A primary focus of a palliative care team is honoring caregivers’ wishes for the child’s care across care settings — inpatient, outpatient and at home — and coordination between their primary and specialty care teams.

Care can begin at any stage of an illness — although ideally at the time of diagnosis of a life-limiting condition — and can be provided along with curative treatments, even in the setting of hospice care.

While in the adult model palliative care is usually added when the patient has a life expectancy of roughly two years, in the pediatric population patients are often born with multiple congenital anomalies that create the need for palliative care support from birth, Beall says. “Some children and their families never have the opportunity to experience ‘health,’ making the early addition of pediatric palliative care services critical.”

Pediatric hospice care, which is what she calls the “end of the spectrum of palliative care,” is typically delivered when a child’s life expectancy is less than six months. However, “predicting life expectancy in the pediatric population is much more difficult with less well-defined clinical trajectories than those available for adult disease processes, such as dementia, heart failure and chronic lung disease,” she explains. “Many pediatric patients are receiving curative and life-prolonging treatments which result in clinical improvements that allow them to ‘graduate’ from hospice. That is a huge source of joy for our team.”

Pediatric patients on hospice can receive all types of medical interventions based on their goals of care, including palliative chemotherapy, blood transfusions, even solid organ transplants, along with valuable in-home support provided by a hospice team, Beall says. In 2010, President Barack Obama signed the Concurrent Care Provision, part of the Affordable Care Act, into law. It requires state Medicaid programs to pay for both curative and hospice services for children under age 21 who qualify.

Both services are ultimately about supporting families through what may be the most difficult days of their lives. Despite that, “it is the most rewarding medicine I’ve ever done,” Beall says. “Part of it comes from the kids themselves, because they just don’t let things get them down. And part of it is that you’re making sure families understand there are choices and that the palliative care team wants to honor the goals parents have for their child’s care.”

From 2011-17, she served on a contract basis as the service director of hospice and palliative care for AU Health. In that role she was responsible for the development of an inpatient hospice care program for both pediatric and adult patients and served as a palliative care consultant for pediatric patients. She has also served as medical director for several adult and pediatric hospice programs.

In 2016, Georgia Gov. Nathan Deal appointed her to serve on Georgia’s Palliative Care and Quality of Life Advisory Council.

Beall completed her pediatric residency at MCG and CHOG in 1994 and served on the medical school’s faculty from 1994-2017.