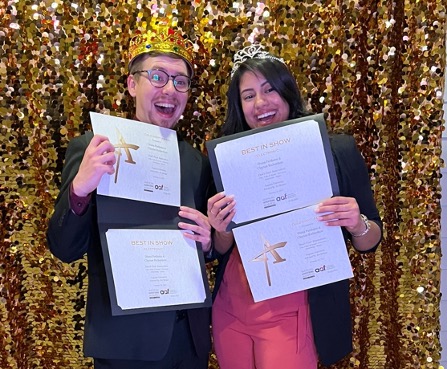 Two Augusta University students have been busy this awards season producing media that is accessible and eye-catching.

Clayton Richardson, a communication major in Pamplin College of Arts, Humanities, and Social Sciences, and Diana Pacheco, a biology major in the College of Science and Mathematics, recently won big at the American Advertising Awards, known as the ADDYs. They won both Gold and Best In Show awards, along with $250 scholarships.

Lynsey Steinberg, a co-founder of the INNOVATE student competition, empowered Richardson to create a video to promote the event. Tim Williams, instructional multimedia producer in the Center for Instructional Innovation, Art Berger, director of multimedia in Communications and Marketing, and Arthur Takahashi, instructional designer for the CII, acted as mentors and advisers to Richardson over the course of the project.

Thanks to the help of Dr. Giada Biasetti, a trilingual associate professor of Spanish at Augusta University who encouraged Pacheco to take more opportunities, Pacheco translated and dubbed the video in Spanish to make it more accessible. Thanks to their win, the video will now be judged in the regional Spanish category.

The idea behind the project was all about innovation. Richardson decided to take a new and different approach to showcasing a problem that needed a solution.

“I was given complete creative control for the ad. To appeal to that demographic, they thought a humorous ad would grab more viewers’ attention alongside a ‘call to action,’” said Richardson.

Given that Halloween was right around the corner, Richardson decided to lean into that theme and use it as the foundation for his innovation ad. His advisers were eager to lend a hand when they heard his ideas. From props to actors, Richardson began constructing his ad through long hours of work and dedication. Mixing horror cliché elements in a world where innovation is normally seen as clean and clear was meant to catch the eyes of his peers.

Berger reached out to Richardson and informed him of the ADDYs, where he decided to then enter his work. Knowing that he was going up against a wide range of film students across Georgia, Richardson doubted his work was going to take home anything at the ADDYs.

“I thought I might at the most get an honorable mention. The fact that I won not only a Gold ADDY for ‘Film, Video, Sound-Television Advertising-Single’ and ‘Best in Show’ was truly unbelievable and emotional. I struggled to hold back tears when they called my name not once, but twice. I’ve never won an award for my work, and I’m still awestruck today,” said Richardson.

“This isn’t just my victory, though. It took my mentors and peers believing in me and their tireless, unwavering support that got me here. I know it sounds cliché, but I am truly blessed to have these professionals and friends in my life.”

The award helped to boost Richardson’s confidence in his work, assuring him that it is good enough to compete on a professional level, and that his work ethic will continue to pay off. His wins even encouraged him to submit to more competitions.

Pacheco, who is also pursuing a Spanish minor, felt the experience was surreal when she was asked to be a part of Richardson’s project. Being able to showcase the Department of English and World Languages made Pacheco and her professors proud.

“I felt happy,” she said. “It means a lot to me; this shows and proves how important it is to not only communicate in English but also in Spanish.”

This win and experience have encouraged Pacheco to take more risks and be a part of more projects like Richardson’s in the future.

Both students’ faculty and staff advisers are proud of their work on the ad project.

“I am incredibly proud of Clayton. He definitely showed all that during his internship with Tim and me at the Center for Instructional Innovation and throughout the production of this award-winning video, which was his final internship project with us,” said Takahashi. “I also want to thank Art Berger, who advised Clayton during the award-submission process.”

Williams, who acted in an advising role, had only praise for the students.

“Clayton displayed great pride and integrity in his work for the world to see and has received multiple accolades and scholarships, and as educators, there’s nothing more rewarding than to see such an achievement! Thanks to Art Berger for advising and compelling Clayton to go through the award submission process,” said Williams.

Biasetti is known for pushing students to step outside of their comfort zone and help them be creative with translation and dubbing. She is proud that Pacheco represented the Spanish program in the Department of English and World Languages.

“I am beyond proud of Diana for her work dubbing Augusta University’s promotional video and winning an ADDY award! I’ve known Diana for a couple of years now and have witnessed her strength and growth in my classes. She not only provided her voice for the Spanish version of the video, but also reviewed and edited the translation, practiced delivering the speech by perfecting her tone of voice and emphasis, and reflected on her experience,” she said.

Pacheco is no stranger to dubbing videos in Spanish. She worked on dubbing student Haley Dowdy’s “My Augusta University Story” video in Spanish. Pacheco’s experience helped tremendously with Richardson’s ad.

“She did an excellent job and made all of the Spanish program proud. These kinds of initiatives are also what give language departments the opportunity to demonstrate their relevance in the world, and we thank Diana for representing us so well. ¡Felicitaciones, Diana!”

See all the entries on the AAF Augusta website.

Morgan Hayes is the Communication Specialist for the Pamplin College of Arts, Humanities, and Social Sciences. Please contact her about design inquiries, and media and event promotion. 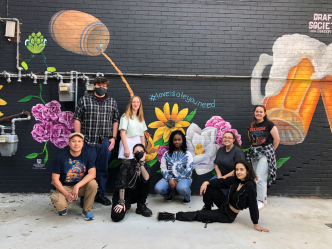 Written by Morgan Hayes
In photos: The women of JagNation
FacebookTwitterPinterestWhatsApp
Nominations open for Boundless Teaching Award through March 31