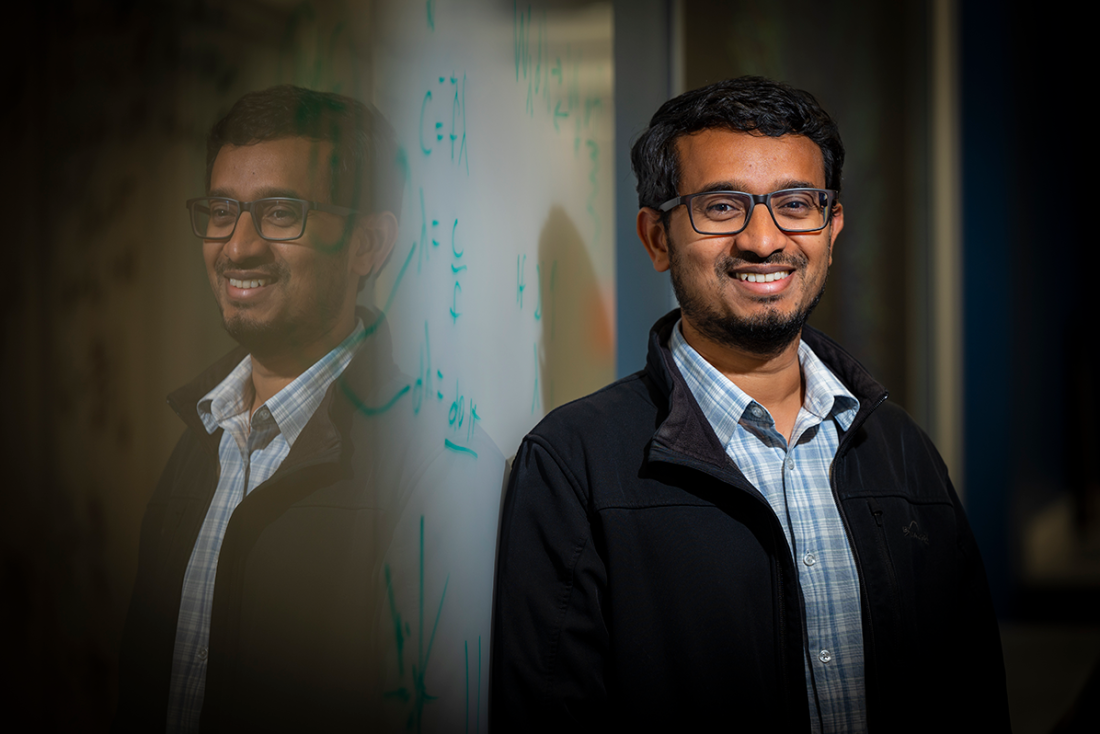 From cells knowing where and when to move during embryo development to the whys behind some of the most “basic” necessities for humans, researchers are constantly looking to understand the “hows” and “whys” behind these processes.

But it’s not just those dedicated to health care fields who are helping look for answers.

As part of a four-person international team, Malmi-Kakkada recently worked to find out how and why cells undergo collective migration, which is when multiple cells move in a coordinated manner, with the goal of better understanding processes behind embryogenesis, tissue repair and even cancer invasion.

The study, which was recently published in Nature Materials, showed that cells’ hardness changes based on the stiffness of their migratory surface, known as the substrate. To migrate, the cells rely on both physical and chemical inputs from the substrate.

“Being a computational physicist, I built a computational model to understand how a cell interacts mechanically with the surface on which it moves, called substrate, and I wanted to be able to verify my work with experimental data, which I think makes it much more powerful if you can show the impact of the work on an experimental system,” Malmi-Kakkada said.

To do this, Malmi-Kakkada and the team worked on building a model that would allow them to show how different stiffnesses of the cell and the substrate could play a vital role in the ability of the cells to migrate.

In integrating Malmi-Kakkada’s model with experimental data, the rest of the team in Portugal, led by Elias Barriga from the Instituto Gulbenkian de Ciência, generated frog embryos with substrates of different levels of hardness. They noticed that during embryo development, when the surface became stiffer, the cells got softer and were able to migrate.

But this only answered part of the question, because it still did not address how the cells were able to adjust their mechanical properties when traveling across dynamic and changing surfaces, as is found in a living organism.

This new problem required the team to study how cells that form different tissues interact with one another using an atomic force microscope. This allowed the researchers to measure the stiffness of cells compared to the surfaces they were traveling on during both migratory and non-migratory stages.

“The particular problem that we worked on concerns collective cell migration during embryo development, but we can use the findings of this research to better understand the implications of that in terms of cancer invasion,” said Malmi-Kakkada. “Other teams have studied these particular cells and shown that there are commonalities between how neural crest cells — the type of cell that we worked on — and cancer cells migrate.”

Going into the experiments, the team believed that migrating cells would change their stiffness to match the surface they were moving on, but the study instead showed cells become softer when the substrate got harder.

By combining Malmi-Kakkada’s computational model with the biophysical experiments on the frog embryos, the team was able to discover that clusters of cells spread and travel more efficiently with a higher substrate-to-cell stiffness ratio. In other words, when the cells possessed a harder stiffness than the surface, they would fail to spread or migrate. To be able to migrate and spread properly, the cells needed to become softer.

“Cells are very complicated systems that we are still working to understand, so we had to find a way to simplify it. A perspective that physics can bring in is to simplify the process and try to understand what is most crucial in understanding something that you’re observing.”

Malmi-Kakkada continued, “The first step in looking at the movement of the cells and abstracting it out into a computational model is to think about cells as spheres and assign a property of stiffness to the cell and the substrate on which the cells are moving. Then we had to think about what would be the force that cells generate for movement depending on the hardness of the cell and the substrate.”

The results of the study could impact researchers’ understanding of cell function and migration in multiple areas, including embryo development, how tissues repair themselves or how certain cancers spread throughout the body.

“When doctors take a biopsy from a tumor, currently they look at the genetics and what kind of mutations are there,” Malmi-Kakkada said. “We want to also bring in the perspective that we can measure how stiff the cancer cells are, what are the mechanical properties, and then use that to be able to predict will this cancer spread. If so, what type of movement patterns will it execute?

“Eventually, I plan to expand my research into synthetic morphogenesis. That is if you understand the minimal principles that are involved, let’s say, in embryo development, can we reconstitute some of those processes to build an organ in lab? For instance, if someone needs a liver transplant or kidney transplant, can you build those organs with that person’s own cells in a lab, and then perhaps use that to save lives?

“Understanding the mechanics behind how cells behave can definitely help because it’s well known that mechanical properties play a role in how a cell will change.”