Twenty years ago, hundreds of thousands of lives changed.

On a Tuesday morning in 2001 during the early part of the working day, the World Trade Center complex in New York City was rocked when American Airlines Flight 11 was hijacked and flown into the North Tower in Lower Manhattan at 8:46 a.m. The South Tower was hit by United Airlines Flight 175 at 9:03.

This year, the city of Augusta and Augusta University will come together for the first time to commemorate the 20th anniversary of the Sept. 11 attacks.

The event, which will be held at the Summerville Campus, will begin at 8 a.m. Sept. 11. It will feature the John Davidson Fine Arts Magnet School Jazz Band, led by James Brewer III. Charlie Norwood VA Medical Center, the Augusta Fire Department, Richmond County Sheriff’s Office and Augusta University ROTC Honor Guards will collaborate to present the colors and perform a ceremonial bell ringing at 8:46. All Richmond County public safety agencies will be participating, including fire, marshal’s and sheriff’s offices.

Also at 8:46 a.m., the Stephen Siller Tunnel to Towers Foundation 5K will begin and a bagpiper will play Amazing Grace at 9:03 a.m.

Growing up in New York

John Ryan grew up in Elmhurst, Queens, and across the street from his school was a Fire Department of the City of New York (FDNY) station. Ryan, the emergency manager at Augusta University and AU Medical Center, joined the Air Force in 1983 and became a firefighter, working for the Department of Defense, Fire and Emergency Services for 34 years. He retired as the training chief at the Fort Gordon Fire Department in September 2017.

Growing up, the Twin Towers were something he was in awe of each time he saw them.

“I love being a New Yorker, and the towers were a source of tremendous pride, an engineering feat, a marvel,” Ryan said. “In particular when I was a kid, because they hadn’t been supplanted as the tallest buildings in the world yet. So the Twin Towers were it.”

Ryan, who is also a coordinator for Augusta University’s Critical Event Preparedness and Response (CEPaR), was not in New York City on Sept. 11, but has never forgotten the tragedies and sacrifices made by first responders that day.

“I talked at some length about this with some of the Augusta firefighters who are going to be involved in our ceremony as Honor Guard … and one of the things they’re going to do for us is in addition to the bell ringing that goes on at 8:46, and a series of five, five, five, bell tones that will take place, which is a very somber, significant communication in the fire service as a line of duty death. So when you get five tones, five tones, five more tones over the radio, that’s somebody’s last call.”

The Stephen Siller Tunnel to Towers Foundation’s mission is to honor and support first responders and the military. Tunnel to Towers is also dedicated to the memory of Siller, a fallen firefighter and father of five, who was off duty when the first plane struck. He drove to his Brooklyn fire station to retrieve his gear after hearing about the crash on the scanner.

Siller made his way toward the World Trade Center but discovered the Brooklyn Battery Tunnel was blocked due to security reasons. He was determined to help and strapped about 60 pounds of firefighter gear to his back and ran about 3 miles to the Twin Towers. After his death, the foundation was established by his six older brothers and sisters in his honor.

“Stephen’s story is unique, and it is a story that we tell to try and further the cause of the foundation,” Ryan said.

In 2016, Ryan and his wife, Cornelia, established the Augusta chapter of the foundation and in September 2016 held the area’s inaugural event. There was no event in 2020 because of the pandemic but Ryan is excited for anyone who pre-registers to participate in the event, since they will receive commemorative fifth anniversary challenge coins.

“Our event is growing in ways we have not seen previously,” Ryan said. “Our collaboration with the city of Augusta is such an honor, as is our partnering with the AU ROTC and Office of Military and Veterans Affairs; what these relationships mean to the future of the event can’t be overstated.”

Ryan mentioned that currently about 100 people are signed up for the 5K but he expects just as many to come and sign up the day of the event, which CEPaR is also sponsoring.

Joe Webber, director of CEPaR for the past 10 years, said it’s important to support the foundation, saying it’s an organization worth encouraging and bringing the mantra, “let us do good” to life. Webber also said getting a chance to honor the fallen on the same day as the 20th anniversary of 9/11 is important.

“It’s vital that we, ‘never forget,’” he said. “I do believe it’s paramount to pass on the knowledge and memory to future generations, instilling in our children the significance of 9/11.”

The AU Biomedical Student Association (BSA) is partnering with the AU Medical Reserve Corps to help facilitate the Tunnel to Towers 5K. BSA members will serve as volunteers and staff a couple of the checkpoints along the route. The AU Athletic Department has also stepped up, with both the women’s softball and basketball teams fully engaged. Likewise, the Dental College of Georgia will be supporting the event through a series of volunteer efforts. The Charlie Norwood VA Medical Center, a partner in planning the event, will also be on site with the Vet Mobile and providing representatives to support their services.

Find more information on the Greater Augusta 5K Run/Walk at the Tunnel to Towers website. Participants can register or donate to the event. The funds raised will go toward building SMART homes for wounded warriors. Military members running or walking in uniform as a group can register for free. Those interested in volunteering, please contact John Ryan at 706-495-6958. 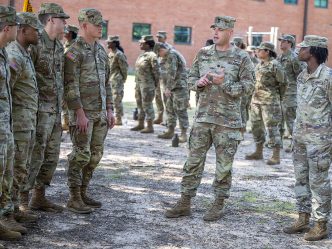 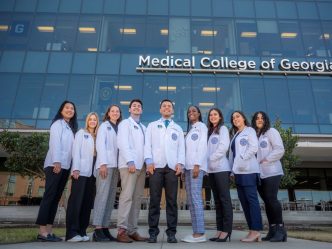