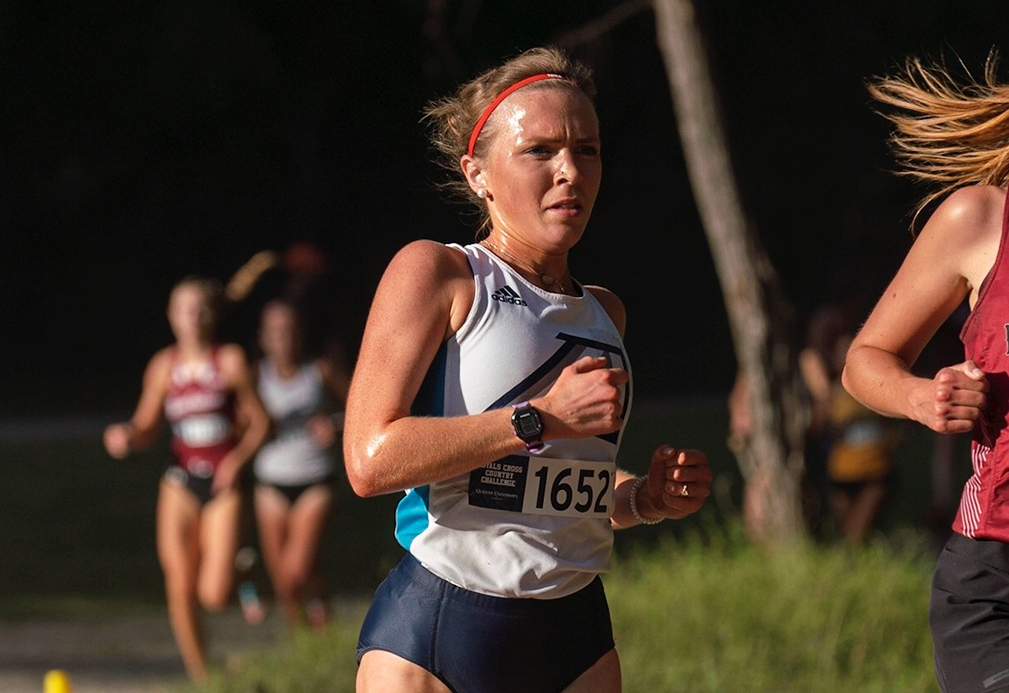 As a young girl growing up in Northern Ireland where sports weren’t as prevalent, Cassie Lagan worked to become the gifted runner she is today.

Lagan grew up in the small town of Omagh before joining Augusta University in 2020, where she notched three second-place finishes, including helping the women’s cross country team to a top-10 finish in the Virginia Tech Alumni Invitational in Blacksburg, Virginia in September and a third-place finish in the Peach Belt Conference championships on Nov. 5.

She said growing up in Ireland was different from her current life in the United States.

“It was a super small population in Ireland,” she said. “My high school was mixed with middle and high school grades of only about 500 students wearing the same uniforms, and there wasn’t a lot of diversity back home compared to Augusta, so that’s something that I noticed since being here.”

Lagan started running cross country and track and field when she was 16 years old, and she said her interest in running came from the encouragement of her peers.

“At first, I just did some fun runs, and then people were saying that I should join a running club,” said Lagan, who is pursuing a degree in middle grades education from the College of Education and Human Development. “I did that and started improving on it and getting better. I knew people from my hometown who also recommended it, so that’s how I started getting into running. I played field hockey until I was about 13 or 14, but I just watched other people excel in running and got hooked.”

Lagan has four older siblings: Jamie, Fintan, Taine and Joanne. Many of Lagan’s family members played sports, including her dad, and they all helped her become the athlete she is today.

“My sister didn’t play sports, but all three of my brothers are rugby players,” Lagan said. “My mom was very supportive of me and came to all of my races back home, and my dad used to be a rugby player as well before he went into rugby coaching, so he’s made me very competitive in running because he put pressure on me to take it seriously.”

Lagan graduated from Omagh Academy in 2020, and she said enrolling at AU was an easy decision for her.

“This was the only school I visited in November of 2019,” Lagan said. “I got to meet the team and see all of the places where we’d run and all the buildings on campus, and it wasn’t too populated or too big of a city, so I felt that it was a good place to be.”

Though choosing to attend AU was easy, Lagan said deciding on her career path was not.

“Back home, I was torn between going to medical school and being a teacher,” she said. “When I was back home, I got to see both atmospheres. I was in both a hospital and an elementary school, and I just preferred the setting and environment of the school. I want to be a middle school teacher, but I also want to get a certification in PE teaching and possibly work as a cross country coach as well.”

Lagan has created great memories throughout her time at AU.

“I was really happy to win a bronze medal in the Peach Belt Conference after coming back from injury during my freshman year,” she said. “Getting to travel to Florida and Virginia and go to a lot of events at AU with my roommates, such as sorority formals and Greek life events, were also really fun to take part in.”

One of Lagan’s roommates is Riley Triplett, a sophomore communication major and women’s cross country runner. Triplett said Lagan has taken on more of a leadership role with this season’s team.

“She’s definitely a leader,” Triplett said. “She’s the oldest and the fastest, and she gets us going for warmups and has done a good job of taking the freshmen under her wing.”

While in Augusta, Lagan met her fiancé, Ryan Webb, who works with satellite control in the U.S. Space Force. She said their relationship began at the end of her freshman year.

“I actually met him in May of 2021 through my neighbors,” she said. “He was stationed at Fort Gordon for the military before moving back to Kentucky and then Hawaii, so with him having to move away at times, we felt it was the right time because with my major, it allows for me to move around with him.”

With her recent engagement, Lagan shared how difficult it is to navigate between studying, training and planning her wedding.

“I find that this semester has probably been the hardest,” she said. “Because I’m now in the program of education, we have to go into middle schools and complete observations and assignments, while also spending three to four hours practicing every day. And then with my other classes on campus, like biology and geography, and my job at the Campus Recreation Center, I don’t really get a break.”

Emma Connelly, the lead building manager for the Campus Recreation Center and sophomore business student in the James M. Hull College of Business, said Lagan brings a lot of qualities to the CRC.

“She’s just a quick thinker,” she said. “When she’s called, she doesn’t overreact with things, and she gets things done. She’s working every weekend when she doesn’t have track meets, and she’s dedicated to working for us and willing to help all the time.”

“She helped out a lot this summer,” she said. “She came back and filled in shifts that we really needed covered and she’s just dependable. We have quite a few expectations because it’s a big responsibility with no pro staff on the weekends, so we need someone super dependable and smart, and she’s that person for us.”

With the 2022 cross country season underway and track and field looming in the spring, Lagan has high goals not only for herself, but also for the women’s team.

“I’m currently in the top two positions on the team this year, and I hope to stay in that position,” Lagan said. “For conference, I want to be able to at least get in the top five individually, and then for regionals, I’d like to get in the top 20. I think I’d be able to get there, but hopefully the team could get to nationals as well.” 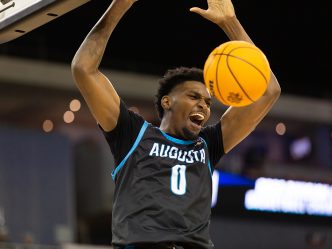