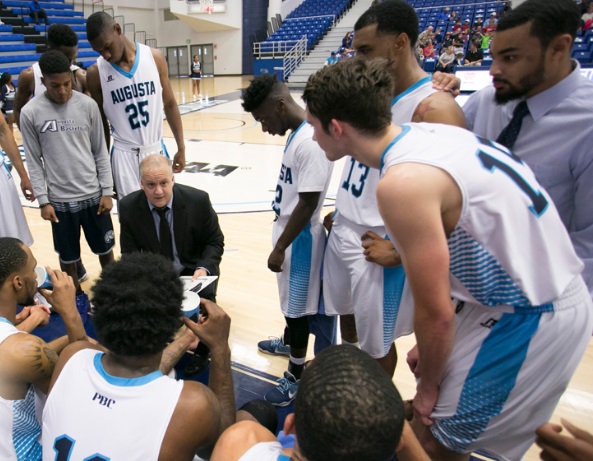 GREENWOOD, S.C. – The Augusta University men’s basketball team will face Columbus State, the No. 2 seed in the west division, in the Peach Belt Conference Tournament Semifinal game on Saturday, March 4 at 1:00 p.m. in the Finis Horne Arena.

The Jaguars (23-6) claimed the 2017 PBC East Division title and the best regular-season record. Augusta has won seven in a row and meets Columbus State (19-8) in the No. 1 semifinal game. Lander and UNC Pembroke meet on the other side of the bracket.

Augusta is making its 26th appearance all time in the PBC Tourney. The Jaguars enter Saturday’s semifinal with a 29-21 record in the league tournament which began in the 1991-92 season.

“We are excited about advancing to the semifinals of the Peach Belt tournament,” head coach Dip Metress said. “Columbus is extremely talented and we got it handed to us pretty good down there before Santa Claus came in December. Hopefully we can compete better this time.”

General admission tickets are $8. For senior citizens, children under 12, and military with a valid ID they are $5. PBC students will be admitted free with a valid ID from a PBC school. Peach Belt Sports Passes with photo ID will also be accepted. Lander University is the host of the tournament in Greenwood, S.C. The 2017 PBC Tourney went to the highest remaining seed in the east division.

The winners of the semifinals advance to the PBC Tournament Championship game scheduled for Sunday, March 5 at 2:00 p.m. in the Horne Arena.