The president of Augusta University’s chapter of the National Student Nurses’ Association has received a scholarship aimed at promoting equity and diversity in nursing.

The Foundation of the NSNA’s Our Race to Health Equity Diversity Nursing Scholarship is sponsored by Johnson & Johnson and supports nursing students from racially and ethnically diverse backgrounds by providing funding of up to $7,500 for tuition, fees and books. Of the thousands who applied, Janelle Adae-Mensah is one of 61 recipients in the country.

She will begin her final year of the College of Nursing’s Bachelor of Science in Nursing program in August, and with the help of the NSNA scholarship, she’ll have one less thing to worry about.

“It’s a huge burden lifted,” Adae-Mensah said. “I don’t have to worry about not being able to purchase some of my textbooks.”

Originally from Lawrenceville, Georgia, Adae-Mensah chose AU because she “wanted to step outside her comfort zone” and appreciated the “variety of health science programs. They’re all on the same campus!”

She began college studying pre-med but quickly realized it was not her calling. Adae-Mensah knew she wanted a career where she would help people after listening to her mother, who was a nurse, talk about her work. Her decision to switch paths was a natural shift.

After graduation, Adae-Mensah plans to pursue a position in pediatrics. She also plans to continue her education in nursing to become a pediatric nurse practitioner.

“It will be challenging to work and take classes in the doctorate of nursing practice program, but it’s what I want to do,” she said.

Adae-Mensah not only has a passion for working with children, but she would also like to serve those less fortunate, especially those with limited access to health care.

Her parents are natives of Ghana, so practicing there might be in her future. While she is not certain it will be Ghana, she knows she will serve those with limited access to quality health care. She knows she can make a difference in the lives of the children wherever she ends up practicing.

“A benefit of nursing is you are able to immerse yourself in another culture utilizing your skills,” she said. 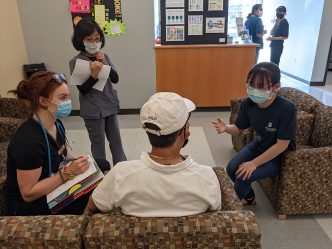